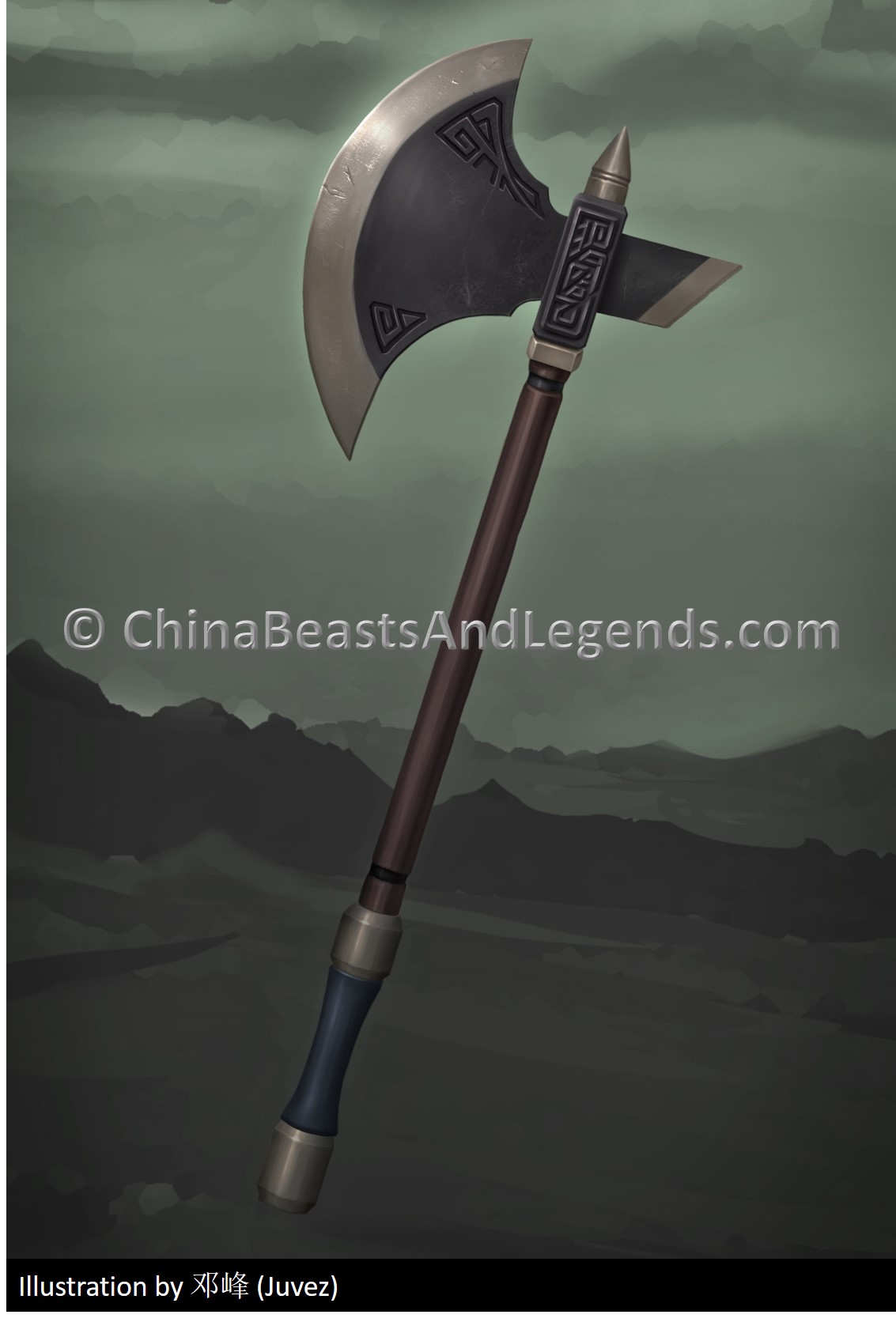 During the time of the Yellow Emperor (黄帝 huáng dì), this weapon was known as a Fu Xu (斧銊 fǔ xù). Back then, it was used not only as a weapon of war, but also as a tool to dish out punishment. It is listed as the fourth of the Five Yellow Emperor's Punishments (黄帝五刑 huáng dì wǔ xíng), or, "the Five Punishments."

China has the oldest continuously operating legal system in the world. The "Five Punishments" changed over time, there are many different versions with punishments ranging from confinement to a room (prison), hard labour, tattooing of the face, cutting off of the nose, castration, feet amputation, squeezing of the fingers between sticks, beating with wooden staves or bamboo whips, forced suicide, and death (oftentimes by beheading).

The earliest Copper Axe to have been found dates back to the Shang Dynasty (商代 shāng dài) (1600 - 1046 BCE), and was clearly not only used in battle, there is evidence to show they were used in ceremonies, too. Some of the axes that have been found have exquisite patterns and designs on them, such as dragons (龙 Lóng), Tao Tie (饕餮 tāo tiè), and other mythical beasts. Important figures were often buried with a decorative Jade Axe as a symbol of ther power and authority.

However, once double-edged and single-edged swords were invented in the Zhou Dynasty (周代 zhōu dài) (1122 - 256 BCE), fewer and fewer people used axes in battle. However, it continued to be used as a cutting tool, for ceremonies, and for beheadings.

You Chao and the Bird Nest

According to Chinese mythology, the first Axe was created by You Chao (有巢氏 yǒu cháo shì). One day, he went to the forest to pick wild berries and watched in amazement as a bird made its nest in a tree. At the time, he and his people lived in damp, pitch black caves (if they were lucky). They longed to find a way to live outside, and he had just found it.

He looked around for the largest tree he could find and climbed up onto the thickest branch. He then began placing smaller branches that had fallen to the floor the same way the bird he witnessed had done before. However, he quickly realised that he was too heavy and that the fallen branches would not be sufficient to hold his weight like they had for the bird. He would need thicker branches, maybe even small trees. He had to find a way to cut them down.

He returned to the ground and looked around for something sharp. The bird had a beak, perhaps if he found something strong and sharp enough, he could cut whatever wood he needed, too. Then, there in a pile of rocks, he found a broken stone. The edge was serrated and sharp, perfect for the job at hand. He rushed to the nearest tree and started hacking a thick branch with the sharp edge of the stone. It worked.

And thus, the first Axe was invented. Over time he improved the design, and he and his people worked together to create more "tree nests" until  they were all able to leave their danky caves and live outside in the trees.