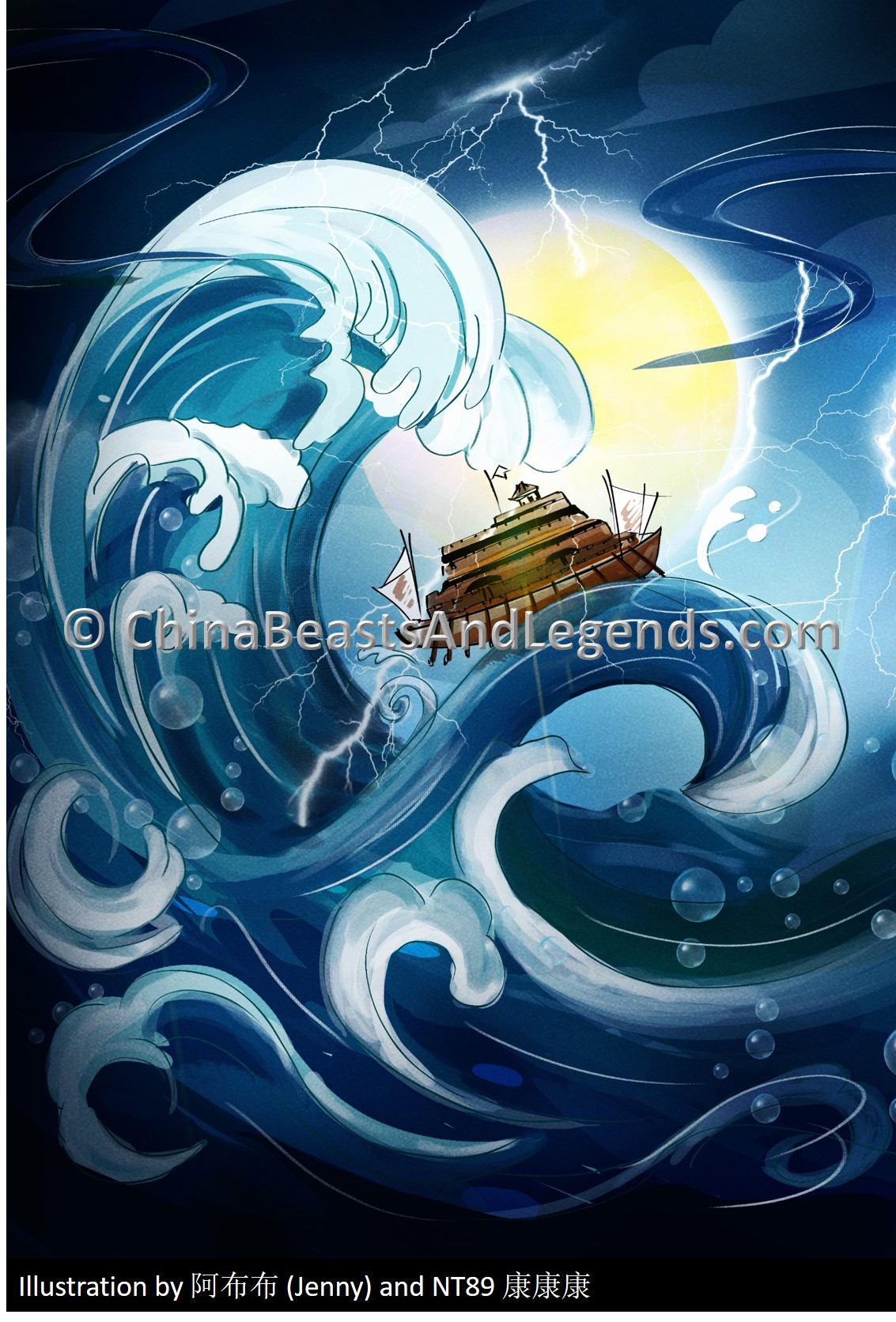 In the early years of the Tang Dynasty (唐朝 táng cháo) (618–907 ADE), Tai Zong led an army to defeat Goryeo1. He defeated Gai Su Wen2 (盖苏文 gài sū wén) in Liao Dong (辽东 liáo dōng) who then fled across the sea to the Korean Peninsula in retreat. Tai Zong was preparing to cross the sea to continue his attack, however, as he reached the sea and witnessed it's boundlessness, he felt sick to his stomach and nearly fell off his horse.

1 Goryeo was a Korean kingdom founded in 918, during a time of national division called the Later Three Kingdoms period, that unified and ruled the Korean Peninsula until 1392.

When his army was prepared and it was time for Tai Zong to climb on his boat, he refused to board. One after the other his generals tried to persuade him, but to no avail. His Chief Marching Commander, Zhang Shi Gui (张士贵 zhāng shì guì), returned to the Great Horde3 frustrated and at wits end. His deputy, Xue Ren Gui, came to him and whispered in his ear. Zhang Shi Gui nodded in agreement.

Chapter 1-1: Cross the Sea in Secret

Metaphor: To Move in Secret

Literal Translation: Hide [from the] Sky [to] Cross [the] Sea

A few days later, Tai Zong was led into a luxurious hall via a dark passageway, where he and his men drunk and played and sung until they all collapsed at the table.

The next day, Tai Zong woke up, still dizzy from the night's festivities, and looked around the room. It was beautifully decorated, even the windows were covered with silk and satin. But before Tai Zong could investigate further, Zhang Shi Gui brought a new group of men in, placed some wine and delicacies on the table, and signalled for them to continue the festivities. Tai Zong joined in until they all collapsed at the table again.

On the third day, Tai Zong woke up and finally had a chance to look around. He stumbled toward the door and when he opened it he was stunned to see that he was standing on the deck of a boat, in the middle of the sea, with his army sailing close around him. He glanced at Zhang Shi Gui and smiled miserably: "you got me."

As the name implies, "Cross the Sea in Secret" means to deliberately create an illusion that allows people to cross the sea unknowingly. This stratagem is used in the military all the time. It is a metaphor for a tactic that uses some form of illusion to cover up one's true intentions. The objective is to blindside the enemy, strike where or when they are unprepared, and catch them at a disadvantage.

The character 天 (tiān) in the Chinese idiom 瞒天过海 can mean "sky," "Heaven," "the Emperor," or "the entire world" (everything within the Earth Realm (人间 rén jiān)). In this instance, 天 is referring to the Emperor. So one could also translate the idiom to "Cross [the] Sea [by] Deceiving [the] Emperor" or "Cross [the] Sea Without Letting the Emperor Know."