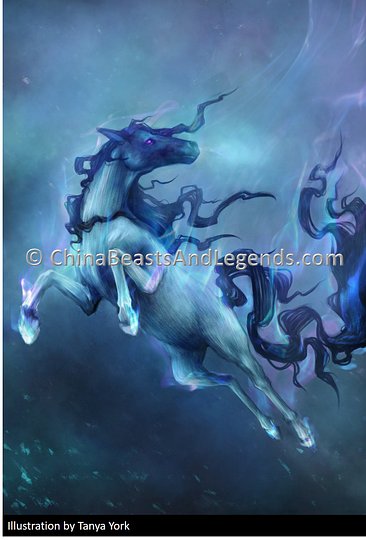 The White Dragon Horse - which is a literal translation from the original Chinese name, 白龙马 - is a character from the Journey to the West (西游记 xi yóu jì). He was once a magnificent dragon called Ao Lie (敖烈 áo liè), the third son of the Jade Dragon, King of the West Sea (西海龙王玉龙 xī hǎi lóng wáng yù lóng), however, after setting fire to a sacred temple and destroying a precious pearl bestowed upon them by the Jade Emperor (玉帝 yù dì), he was sentenced to death.

Before carrying out his sentence, the Jade Emperor held him upside down and struck him 300 times for his carelessness and disobedience when Guan Yin Bodhisattva (观音菩萨 guān yīn pú sà) appeared and pleaded for his life. As a result, rather than being executed, he would be demoted to the human realm (人间 rén jiān) to await the monk, Tang Seng (唐僧 táng sēng), and join him on his pilgrimage to the west.

After some time, Tang Seng and his companions found themselves on She Pan Mountain (蛇盘山 shé pán shān), nearby the Ying Chou Stream (鹰愁涧 yīng chóu jiàn) where Ao Lie laid in waiting. As they came close to the bank Ao Lie rose from the waters, a gigantic white dragon, and without realising who they were, swallowed Tang Seng's horse whole. The Monkey King (孙悟空 sūn wù kōng) swung into action and began attacking Ao Lie who, after quickly realising he was no match for the Monkey King, retreated back into the waters.

Curious about the dragon, the Monkey King met with Guan Yin Bodhisattvato to learn what he could about his origins. Finally, Ao Lie was transformed into a white horse and served as Tang Seng's steed until the end of their journey.