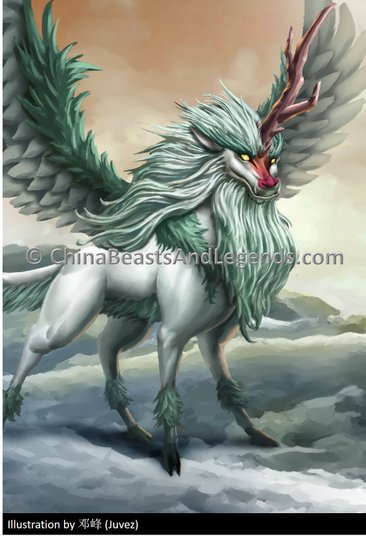 Bai Ze is a sacred and auspicious beast from Chinese mythology, first recorded in the Bao Pu Zi (抱朴子 bào pǔ zi), a text that was believed to have been written sometime between 317-420 ADE. It is a symbolic omen of all that is good and brings joy to all that gaze upon it.

The Bai Ze was first described as a dragon with the body of a goat with a single horn on its forehead1. It is also written that should anyone succeed in killing Bai Ze, they would be struck down by a bolt of lightening.

1 In future adaptations, Bai Ze's appearance changed to that of a lion with a single horn and the beard of a mountain goat. Regardless of version however, Bai Ze is often depicted with wings.

In addition to the above, another reason Bai Ze is reveared is that it is said Bai Ze knows the name and appearance of all living beings, in all the realms, can communicate with all (including humans), and knows how to dispell, exorcise and/or protect against all evil creatures. It is for these reasons that drawings of Bai Ze were often placed on walls and doors to protect the occupants from evil. Images of Bai Ze have also been found on the banners of past armies, and many even practiced sleeping on a pillow that was shaped like a Bai Ze (白泽枕 bái zé zhěn) to protect them during the night. Many children have been named Bai Ze throughout history, even to this day.

Best known for: Able to communicate with all living beings