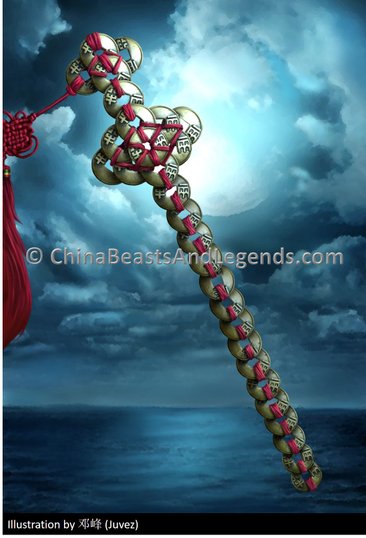 Coin-Swords are magical artifacts made from one hundred and eight copper coins strung into a sword-like shape with red thread, before being blessed by a Daoist Monk.

They are not weapons, per se, they are Feng Shui Talisman (风水符箓 fēng shuǐ fú lù) used by Daoist Monks to catch and subdue ghosts and demons. They are often hung on doors to ward off evil spirits and malicious influences.

Their Chinese name "辟邪剑" literally translates to "ward (against) evil sword," but they are also known by other names, such as, Gold-Coin Swords (金钱剑 jīn qián jiàn) and Copper-Coin Swords (铜钱剑 tóng qián jiàn), and were largely constructed of coins that were made of various copper alloys, such as bronze.

Yan sheng Coins (厌胜钱 yàn shèng qián), also known as Chinese numismatic charms, are special round decorative coins with a square or circular hole in the middle that are mainly used in divination, and Feng Shui.

Though these powerful Feng Shui Talisman can be used to ward off evil, care must be taken when using them in and around the home. Due to them being shaped like swords - which are lethal weapons - their powers, if placed and/or used incorrectly, can cause great harm to the people living in the home, as well as their neighbours.