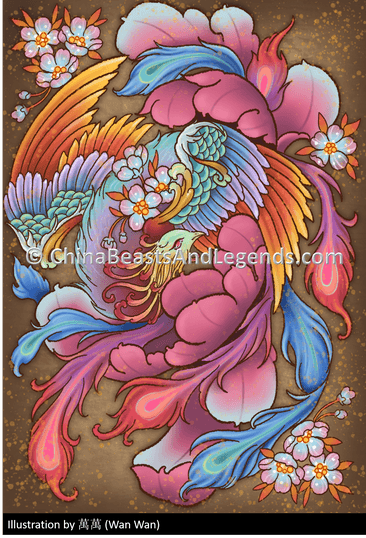 Feng Huang are often referred to as Chinese Phoenixes, however, the similarities between the western phoenix and a Feng Huang are superficial at best.

The Feng Huang is not made of or control fire, it is not reborn from the ashes, and its tears do not heal wounds.

The only things that link the two are the fact that they are both mythical birds with great power, they are both associated with the Sun, and they are both said to be covered in colourful and vibrant feathers.

In addition, the Feng Huang is not to be mixed up with the Zhu Que (朱雀 zhū què), one of the four symbols - also known as the Vermillion Bird - a bird that represents the fire-element, among other things. Given the common confusion between Feng Huang and the western phoenix, it's easy to see why a fire-bird would get pulled in to the mix, too.

In Chinese mythology, Feng Huangs are the most powerful and auspicious of all birds. In the original texts from the Classic of Mountains and Seas, Feng Huang are first described as follows:
"On Dan Xue Mountain (丹穴之山 dān xué zhī shān) there lives a bird which looks like a pheasant but is covered in multi-coloured feathers, its name is Feng Huang. It has the character for “virtue” (德 dé) on its head, the character for “righteousness” (义 yì) on its wings, the character for “character” (礼 lǐ) on its back, the character for “humanity” (仁 rén) on its chest, and the character for “integrity” (信 xìn) on its belly. This bird drinks and eats in perfect balance with its environment. It sings and dances for itself. And when one appears, there will be peace for all on earth."

Best known for: Symbol of the Empress

Still to this day, Feng Huang are reveared as harbingers of peace, however, one thing that did change with time, is the sex of Feng Huang. Originally 'Feng' were male and 'Huang' were female; representative of the yin and yang, chaos and order, stability, peace and harmony. But during the Qin and Han dynasties, the dragon (male) became a symbol of the emporer, and 'Feng Huang' were merged in to one single female entity to symbolise the empress - or the emporer's concubine(s). Nowadays you can often see images of a Feng Huang and Dragon circling each other. This dance symbolises a strong relationship between husband and wife, commonly seen at wedding ceremonies.