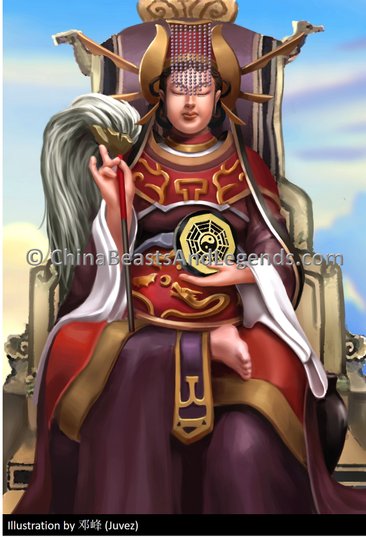 Hou Tu was originally believed to be the son of Gong Gong (共工 gòng gōng), the Water God, and God of the Centre (中央之神 zhōng yāng zhī shén)1.

1 In accordance with the Five Directions; East, West, South, North, and Centre.

However, after the Han Dynasty (汉代 hàn dài) (206 BCE-220 ADE), the image of the God of the Centre gradually evolved to that of a Goddess and was adopted by Daoism, after which she was named "Mother Earth" (地母 dì mǔ)2, equal to the Jade Emperor (玉帝 yù dì), the "Heavenly Father" (天父 tiān fù). She governs Yin and Yang (阴阳 yīn yáng) and nurtures all natural things, hence, she was given the title ”大地之母" (dà dì zhī mǔ), which literally translates to"Mother of the Land/World/Earth."

Best known for: Mother of Earth