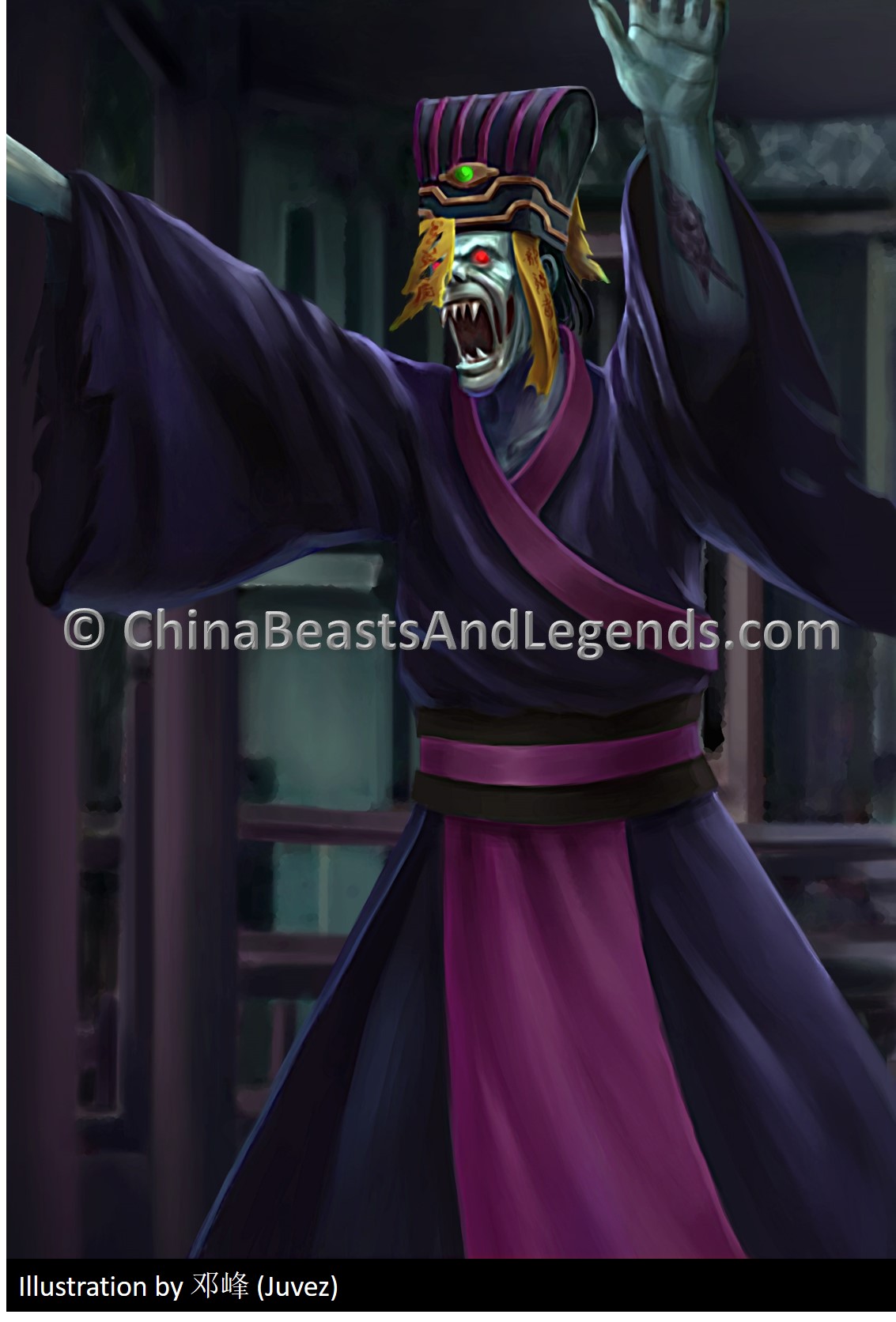 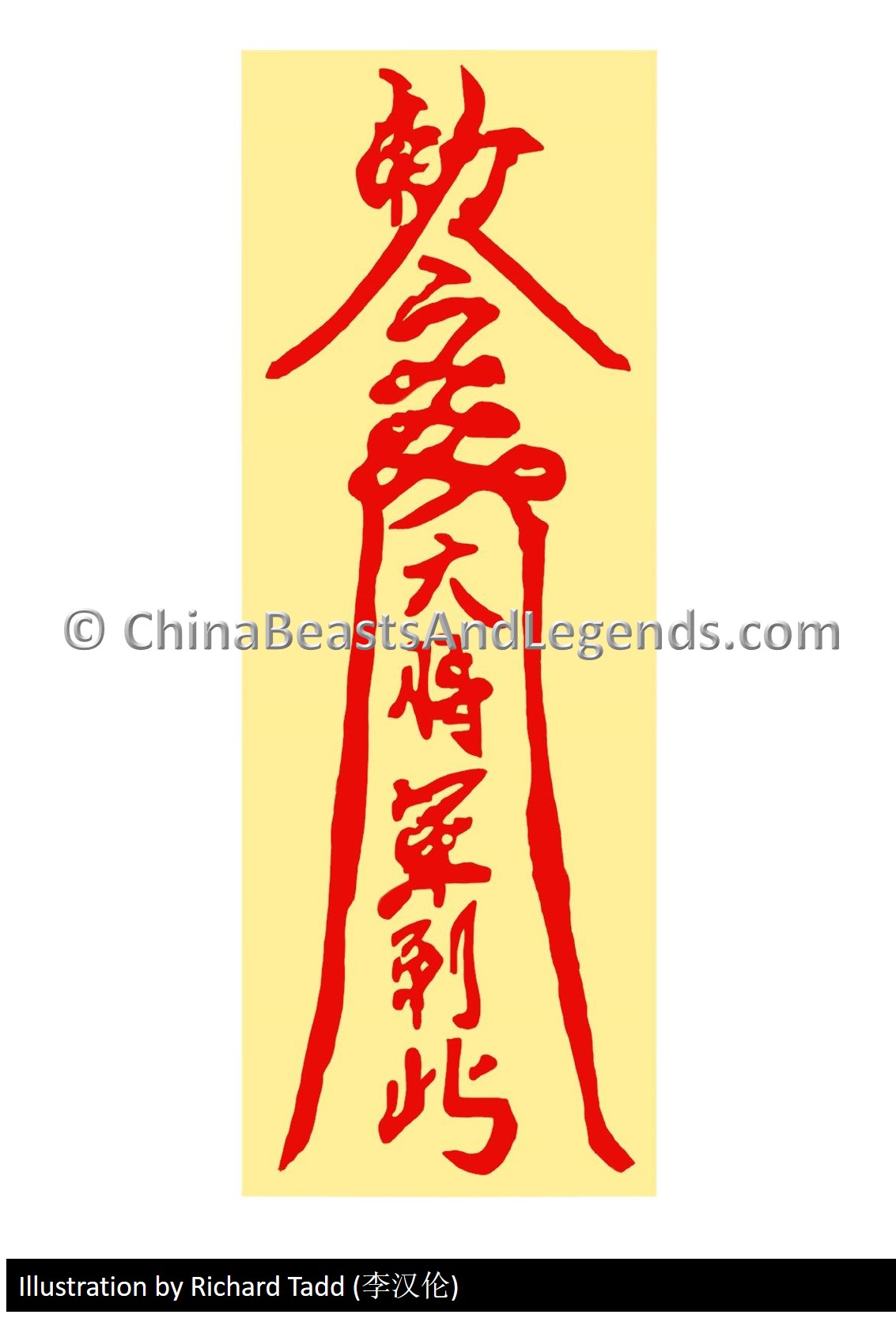 Jiang Shi were first mentioned in Chinese literature during the Qing Dynasty (清朝 qīng cháo) (1636–1912) in a book called Yuewei Caotang Biji (阅微草堂笔记 yuè wēi cǎo táng bǐ jì) (c. 1789 - 1798). They were described as corpses that were reanimated by Daoist priests in an effort to guide them to a certain location for proper burial at the behest of the family of the deceased. You see, the proper burial of a corpse is very important in Chinese culture, otherwise the deceased will be unable to enter the afterlife and continue the cycle of reincarnation. But when soldiers, for example, travelled hundreds or even thousands of miles to fight in wars, their families were unable to bring their corpses back home, nor were the fallen afforded proper burial rights on the battlefield. And so, Daoist priests were called upon to reanimate their bodies and have them hop their way back home.

Daoist priests would use a talisman (符箓 fú lù) with a sealing spell (image below) to control Jiang Shi by sticking it on their forehead. This is also an effective way to stop a Jiang Shi in its tracks. However, if the talisman falls off, they would lose their control over them and the Jiang Shi would be able to roam wherever they chose.

Below are all the possible causes of a Jiang Shi to rise from the dead:

Since Jiang Shi are the reanimated corpses of the deceased, they are often portrayed with varying levels of decomposition – with the recently deceased appearing virtually human, and the long-deceased as decaying, rotten corpses. More often than not, Jiang Shi have pale-white or greenish skin and hair, with a green fungus or mould growing all over (sometimes depicted with a green glow). In some versions of the stories, Jiang Shi also have long, lolling tongues (much like Hei Bai Wu Chang 黑白无常) and long, sharp, black finger nails that cannot be broken.

The Eight Types of Jiang Shi

Below is a descrption of the eight different types, of "levels," of Jiang Shi:

If you ever find yourself confronted by a Jiang Shi, below is a list of methods you can use to escape:

Chi You and His Fallen Brethren

According to legend, thousands of years ago, Chi You (蚩尤 chī yóu) led his troops to fight with so many hostile tribes that the fields were covered in corpses and the rivers flowed blood-red. After one particular battle, Chi You and his troops were forced to retreat. As his soldiers carried away the wounded, Chi You decided he could not leave his fallen brethren on the battlefield. He commanded his troops to use their magic to reanimate the dead and send them back to their hometowns for proper burial.

After performing a ritual on the battlefield, all the corpses stood up and began walking southward in unison. They used magic (五更大雾 wǔ gēng dà wù) to fog the minds of oncoming enemies, giving the dead and the living a chance to escape.

During the Qing Dynasty, in a place called Xiang Xi – where there is a strong “witch culture” – when a person died far away from home, if a family could afford it, they would hire a corpse walker, or corpse driver, to bring their deceased family member home. In order to maximize their profit, these corpse walkers would often transport several corpses at once. The deceased would be held by two bamboo poles, and carried long distances by the corpse walkers. As the bamboo flexed and the living men moved, the corpses had the strange appearance of hopping by themselves.

Since corpse walking was looked down upon, and, in the end, was made illegal, corpse walkers would often use the cover of night to hide their actions from officials. This may well have been the inspiration behind the book, Yuewei Caotang Biji, and help explain some of the characteristics that define Jiang Shi.

During the Ming (明朝 míng cháo) and Qing Dynasties (清朝 qīng cháo) - 1368-1644 and 1636-1912, respectively - whenever there was a major drought, some villages in China would search the tombs of the recently deceased and burn the bodies that were decomposed in fear that they would rise again as Jiang Shi. They believed that only once all Jiang Shi were destroyed would it rain again.

Jiang Shi are reanimated corpses that feed on the life force of the living (also known as Qi or Chi (气 qì)). The term Jiang Shi can be literally translated to “stiff corpse,” and since these creatures hop around instead of walking, they are also known by other names, such as Tiao Shi (跳尸 tiào shī) – “jumping corpse”, or Yi Shi (移尸 yí shī) – “moving corpse.” According to legend, the reason they hop is due to severe rigor mortis of the body making it impossible for them to move like the living. As a result, they are often portrayed as rotting corpses hopping through the dark with their hands held out rigidly in front of them for balance. And though this might sound comical at first, beware, for once a Jiang Shi has fed on enough Qi, they can become extremely adept jumpers and appear behind you from a great distance making them an adversary worthy of your fear and respect. In fact, in some versions of the stories, Jiang Shi can transform into balls of light and float around in the night luring naïve wanderers to their death. Other stories tell of Jiang Shi that are able to fly and that gain more intelligence and strength with every Qi they feed on.

Unimaginatively, the English word “zombie” is translated to 僵尸 (Jiang Shi) in Chinese, despite them being two completely different entities, and just to add to insult, due to a few overlapping qualities with the western concept of a “vampire” – such as a fear of the light, returning to their coffins or a dark place during the day, and “sucking life” out of their victims etc. – Jiang Shi are often referred to as “hopping zombies” or “hopping vampires” in English. Neither term should be taken literally as they are completely separate creatures.