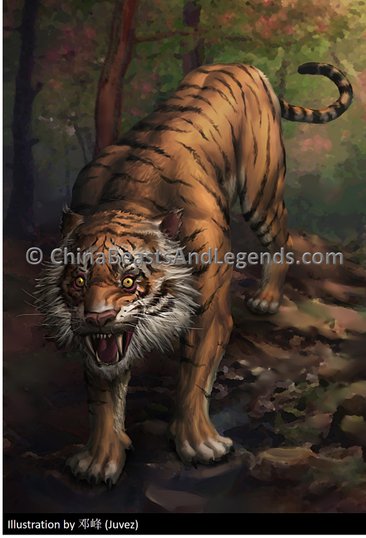 In China, the tiger is known as "the king of beasts" (百兽之王 bǎi shòu zhī wáng). Tigers symbolise might, bravery, and authority, and were worshipped by the ancient Chinese. According to legend, there are five tigers that stand out from the rest, they are:

Tian Wu (天吴 tiān wú)
Tian Wu is a God from the Classic of Mountains and Seas (山海经 shān hǎi jīng) and is described as having eight heads with human faces, the body of a tiger, eight legs, eight tails, and is cyan and yellow all over.

In ancient times there was a tribe named Wu (吴 wú) that worshiped a God of the same description. They believed it to be the God of Water - much like Gong Gong (共工 gòng gōng) - that could swallow clouds and fog, call the wind and rain, and even control floods.

Bi An (狴犴 bì àn)
Bi An, also known as Xian Zhang (宪章 xiàn zhāng), is a powerful divine beast from ancient Chinese mythology, and is the seventh son of the Nine Sons of the Dragon (龙生九子 lóng shēng jiǔ zǐ)1. Bi An was born from a tiger mother and takes the form of a tiger-dragon hybrid. Of all things, Bi An is said to enjoy litigation, which is why you can find his statues placed over prison gates, keeping guard over the prisoners.

Moreover, Bi An is said to be the protector of all people and has the inate ability to distinguish right from wrong. In addition to decorating prison gates, statues of Bi An can also be found on both sides of the hallways in official government buildings.

Best known for: the King of Beasts

1 The Dragon King (龙王 lóng wáng) is said to have had nine sons with nine different mothers, and though the list may differ from source to source, there are always nine, and the most common version is as follows:

Lu Wu (陆吾 bì àn)
Lu Wu, also known as Kai Ming Shou (开明兽 kāi míng shòu) - literally the "Enlightened Beast" - is described in the Classic of Mountains and Seas as having the body and paws of a tiger, a human face, and nine tails. Lu Wu is a Mountain God (山神 shān shén) residing over Kun Lun Mountain (昆仑山 kūn lún shān) and is said to be the guardian of the Palace of Kun Lun in the Yellow Emperor's (黄帝 huáng dì) capital. Lu Wu is also the guardian of nine of the thirty six Heavens with a domineering appearance that is said to be able to deter any who dare to covet the Heavens.

Qiong Qi (穷奇 qióng qí)
Qiong Qi is one of the Four Fearsome Beasts (四凶 sì xiōng). According to the Classic of Mountains and Seas, Qiong Qi is said to have the body of a tiger with wings, and enjoys eating humans, starting from the head. Futhermore, according to legend, Qiong Qi would often appear flying overhead during battles. It would swoop down to devour the person whose argument was most just, then proceed to bite the noses off of anyone loyal to them. Qiong Qi would then capture and release beasts to fight for the wrongdoer, and encourage them to do more evil deeds. Simply put, Qiong Qi is said to punish the good and encourage the evil.

The ancient Chinese were believed to have called anyone that had no empathy for others and acted more like a villain than a gentleman, Qiong Qi.

Bai Hu (白虎 bái hǔ)
Bai Hu - literally "White Tiger" - is one of the Four Symbols (四象神兽 sì xiàng shén shòu), Guardian of the West (the direction), and is representative of Metal (金 jīn) and Autumn, in accordance with Wu Xing theory (五行 wǔ xíng). As one of the original Creation Gods, Bai Hu has been worshiped and revered for thousands of years. He is the God of War and Death and emobdies justice, bravery, and majesty. In some parts of China he has also been considered a bringer of fortune and is used to ward of evil. Bai Hu can be found throughout history on the flags of armies and is often depicted alongside the dragon.

It is said that Bai Hu will only appear when the emperor rules with absolute virtue or when there is peace on earth.