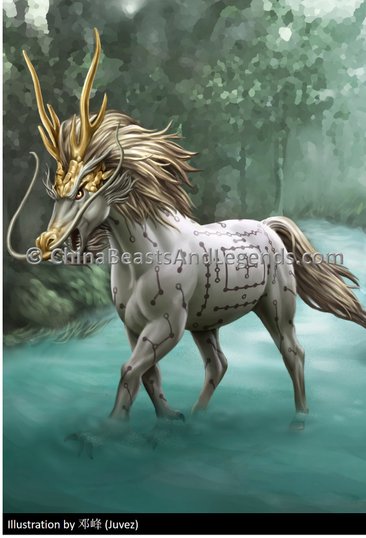 The Long Ma, which literally translates to "dragon-horse," is a legendary divine beast, part dragon, part horse, from the Book of Rites (礼记 lǐ jì). It appears in the story of Fu Xi (伏羲 fú xī) and bestows upon him the gift of the Eight Trigrams (八卦 bā guà). The Long Ma is believed to be a symbol of good fortune and vitality.

The Eight Trigrams and Long Ma

Fu Xi led his people to the Yellow River (黄河 huáng hé) where they lived a simple life, not worrying about (or even aware of) time, hunting when hungry, and drinking when thirsty. However, when times were hard and food was scarce, he couldn't help but pity his children as they suffered from hunger. He longed to find a way to ensure they would never go hungry again.

For the next part of this story, there are two widely accepted versions:

1. Every now and again, a large beast would rise out of the river and fly away, creating huge waves that would harm Fu Xi's people. After a few occurences, Fu Xi decided if it appeared again, he would subdue the beast and make sure it never harmed them again. The next time it rose from the river Fu Xi attacked. They fought in the river for seven days and seven nights until Fu Xi was finally able to overcome the beast. As he held it down he noticed that the beast had the body of a horse, and the head, scales and claws of a dragon. After further inspection he noticed there was a pattern on it's back unlike anything he had ever seen. The beast became known as a Long Ma, and the pattern would become known as a Bagua.

Best known for: Delivering the Bagua to Fu Xi

2. One day, when Fu Xi was fishing in the river, the water began to rise in an unnatural manner. There, in the middle of the river, Fu Xi noticed a beast appearing from beneath the water with the body of a horse, the head of a dragon, and a large pair of wings. The beast stood on the water and walked slowly towards Fu Xi. It raised its head as if out of respect for him then turned to one side. Fu Xi examined the beast and noticed a pattern on its side, unlike anything he had ever seen. He memorised the patterns, and when he was finished, the beast raised it's two front legs in the air, threw back its head, and flew off into the sky.

Fu Xi picked up a twig and drew the pattern into the clay on the riverbed. He stared at the pattern for days on end trying desparately to understand their meaning. Then, one day, it came to him. The lines in the pattern started to make sense. What he saw was patterns of changes in the universe, from which he could predict the future. He named the pattern Bagua.

These days the Bagua, or Eight Trigrams, is used as an ancient divination tool in Feng Shui (风水 fēng shuǐ) - the art of placement to balance the elements in a given space - and is also used in many other disiplines such as astronomy, astrology, geography, geomancy, anatomy (Chinese Medicine), and elsewhere. It is said to be able to tell the future of everything and holds the key to the secrets of the universe.