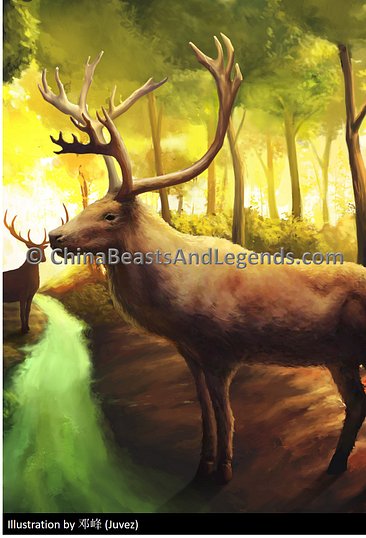 The Mi Lu - commonly known in English as the Père David's deer (Elaphurus davidianus) - is a real species of deer that is endemic to China and can still be found there today.

They were first recorded in the Classic of Mountains and Seas (山海经 shān hǎi jīng) thousands of years ago, within which there are multiple accounts of sightings across the entire land. Sadly, due to human intervention, their population dwindled to the point of near extinction so that by the end of the Qing Dynasty (清朝 qīng cháo) (1912), they could only be found in Nan Yuan (南苑 nán yuàn) - the royal hunting garden in the south of Beijing. Today, their numbers are on the rise after being successfully bred in captivity with somewhere around 10,000 known deer in the wild, as well various nature reserves across China.

The thing that makes Mi Lu stand out from other species of deer is their appearance; they are said to have the face and head of a horse, the antlers of a deer, the hooves of an ox, and the tail of a donkey, Hence, in Chinese, they are also known as 四不像 (sì bù xiàng), which in English literally translates to "Four Unalikes".

There is a stone table in Tai Gong Temple (太公庙 tài gōng miào)1 under which the image of Four Unalikes is engraved. According to legend, Four Unalikes was an auspicious mystical beast (神兽 shén shòu) that served as Jiang Zi Ya’s (姜子牙 jiāng zi yá) mount. It was believed to have vast supernatural powers, could produce and ride on clouds, travel thousands of leagues in a single day, and defeat Yao (妖怪 yāo guài) with ease.

Best known for: Also known as the "Four Unalikes"

A family lived at the foot of Tai Hang Mountain (太行山 tài háng shān) with two sons, each married, the eldest of which had a daughter. The wife of the second brother had tried for many years to get pregnant but nothing seemed to work. Meanwhile, secretly, in order to inherit the family’s property, the wife of the eldest brother prayed every day for a son and cursed her sister-in-law to never have children.

When she arrived at the cattle pen she saw a starving cow and then, without hesitation, she did the unthinkable, she threw the baby into the trough. The cow stared at her for a while before turning to the baby and swallowing him whole. Surprised and delighted she hurried back to her sister-in-law's bedside and waited. When her sister-in-law finally came to she immediately asked to see her child to which she received a cold response, “What child? You had a stillbirth, there’s nothing but a bag of dirty water here.”  The would-be mother was inconsolable.

Shortly after feeding the baby to the cow, the first sister-in-law fell extremely ill. After numerous visits to the doctor and many herbal medicines, it was clear that conventional methods were not going to save her so the family called for a Wu Po (巫婆 wū pó)2. As soon as the Wu Po stepped on the family property her gaze was drawn toward the cattle pen. She noticed the cow had an unnaturally large belly and questioned the second sister-in-law about it. She explained that the cow’s belly had been growing bigger day by day with no explanation why when the Wu Po placed one hand on her empty belly and sighed a heavy sigh. Then she turned toward the second sister-in-law and her husband and instructed the husband to take the cow to market, have her butchered, to bring back the heart and feed it to his wife – only that could save her.

Despite having raised the cow by hand since birth the second sister-in-law agreed with a heavy heart for the cow to be slaughtered in the hope that her sister could be cured, totally unaware of the treachery that had just befallen her.

The husband set off to the market immediately and head straight for the butcher’s shop. There he found a young Jiang Zi Ya (姜子牙 jiāng zi yá) completely dumbfounded by the fact that he wanted such a strong, pregnant cow put to slaughter. After hearing the story Jiang Zi Ya still could not bring himself to slaughter the cow, he offered to pay for her and give him the heart of another pregnant cow he had purchased two days prior. Believing he had struck a great deal the husband agreed and returned to his bed-ridden wife with the heart of another pregnant cow in hand.

After Jiang Zi Ya bought the pregnant cow he took great care of her and within a few days, the calf was born. However, upon examination of the calf, Jiang Zi Ya was once again dumbfounded for he could not identify the species. It didn’t look like a horse, a deer, a cow, or a donkey3, but it had features that matched each. At that moment he decided that he didn’t care what it was, he would look after it and raise it like it was part of the family. He decided to call it Four Unalikes and from that day forth the two were inseparable. Whenever he fed Four Unalikes, it would lower its head and open its mouth as a sign of gratitude towards him. Although Jiang Zi Ya's family was very poor he fed Four Unalikes well. It grew big quickly and needed more and more food so Jiang Zi Ya would go without to ensure it had enough.

In the second year, there was no rain for a long time, the land was cracked, crops failed, and a plague of locusts forced the starving to leave their homes. Four Unalikes saw that Jiang Zi Ya's house was empty and that business was bad, it realised it could no longer burden its master and must leave to fend for itself.

One day, Four Unalikes went to Jiang Zi Ya, knelt down on both front legs, and spoke to him for the first time, "Master, you have raised me as best you can since birth, fed me well and taken care of me, but I have become a burden and can no longer stay with you. I can fend for myself now, now that I have grown up. I cannot bear to drag you down any longer.

Should you miss me, just call my name and I will return to your side. And if you should ever find yourself in trouble, call out my name and I shall come to your aid."

And with that, Four Unalikes kowtowed three times, breathed out a white wisp of cloud, and flew away into the sky. A speechless and teary-eyed Jiang Zi Ya stared at the wisp of white cloud in the vast blue sky for a long, long time.

After a while, Jiang Zi Ya moved to a town by the Yellow River (黄河 huáng hé) called Meng Jin (孟津 mèng jīn), built himself a grass hut and opened a small restaurant. Business was better than he had anticipated, by the end of the first day all the rice and noodles had been used up. That night he laid in bed thinking about Four Dislikes and muttered to himself about what had happened until he eventually fell asleep. When he awoke he found the rice and noodle jars were full to the brim again, ready for business. This continued every single day, he had an endless supply of rice and noodles. Every night he would dream that Four Unalikes delivered them to him.

Time flew fast, and before he knew it five years had passed since the day Four Unalikes spoke to him. Then, one night, Jiang Zi Ya had a new dream, he dreamt that Four Unalikes was out of breath as he rushed towards him to say, "After I left your side, master, I learned Daoism (道 dào) with Yuan Shi Tian Zun (元始天尊 yuán shǐ tiān zūn) in Kun Lun Mountain (昆仑山 kūn lún shān). I come here now to tell you that the Yellow River is about to burst. Please escape as quick as you can, master! "

Jiang Zi Ya woke up from the dream with a start. He immediately picked up a small gong and ran to the streets shouting: "Good people of Meng Jin, the Yellow River is about to burst, run for your lives!" Thankfully, the people listened. One by one they packed up what they could carry and fled Meng Jin.

After three days, dark clouds rolled in over Meng Jin, the winds were violent, lightning flashed, and thundered overhead. Heavy rain poured down for three days and three nights until the embankment finally gave way. Thousands of acres of fertile fields and hundreds of homes were flooded. Despite their loss, the people thanked Jiang Zi Ya for saving their lives and allowing them to flee in time, saving what they could of their possessions. But Jiang Zi Ya would not accept their thanks, he told them about his beloved Four Unalikes who became an instant legend among the people. They would go on to remember what Four Unalikes had done for them and tell their story to whoever would listen.

Later, Four Unalikes would become Jiang Zi Ya's mount and the two had many adventures together, defeating evil and helping people wherever they went. The two are well known to this day.

2 The closest thing to a Wu Po in western folklore is a witch.

3  In different versions of the story the four animals vary. Another common set (although not considered official) is a horse, mule, leopard, and a tiger.