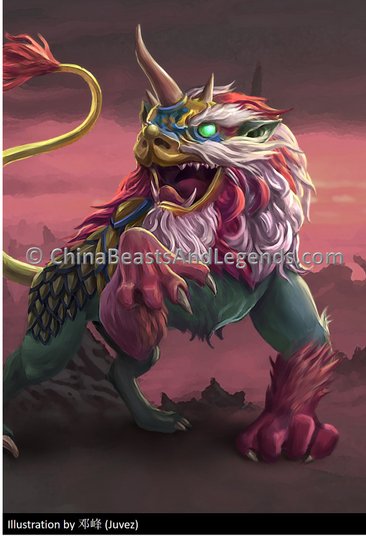 Nian (年 nián), or the Nian Beast as he is often referred to, is an evil creature from Chinese legend. According to the stories, in ancient times, at the stroke of midnight on the last day of the year, the Nian Beast would emerge from his mountain lair (or from the sea depending on the version) and attack nearby villages. Any village he decided to strike would be slaughtered, their crops and livestock devoured or destroyed.

The Nian Beast with his viscious claws, teeth, horns and brute strength was a harbinger of death, it's said that not even Zhao Shen (灶神 zào shén) - a powerful and heroic deity - was a match for him.

After years of suffering, word slowly started to spread amongst the villages that the Nian Beast was afraid of three things: loud noises, the colour red, and peach-wood charms or pairs of red scrolls (红对联 hóng du ìlián). In some versions, he is also afraid of fire.

And so, at the end of each year, the villagers would let off firecrackers, hang red scrolls in their doorways and cover their village in red decorations to deter the beast. And after Nian was successfully driven away, the people would say to one another, “we have overcome another year” – where the character for “year” is the same as the beast, Nian (年) and the character for "overcome" is Guo (过). This is why the Chinese began to refer to this celebration, and the customs involved, as Guo Nian (过年 guò nián), which means "to pass over Nian" or "to overcome Nian." Over the years, this practice became a holiday custom, and is commonly known as the Spring Festival (春节 chūn jié).

Nian and the Old Beggar

Legend has it that in ancient China, there was a beast called Nian. The creature had a pair of horns growing from its head and sharp fangs made for ripping flesh from bone. There was death in its eyes that glowed with a malevolent light. Nian lived in the deep sea and only climbed ashore on Chu Xi (除夕 chú xì) – Chinese New Year’s Eve in accordance with the Lunar Calendar (农历 nóng lì) – killing villagers and devouring livestock. Ever since, each year when Chu Xi came about, the people from every village, old and young, would flee to the mountains with their families to hide from the beast.

One year, when Chu Xi was approaching, people in the Tao Hua Village (桃花村 táo huā cūn) were taking their families to the mountains when they came across an old beggar. The man had a flowing silver beard with eyes that gleamed like stars. The beggar walked into the village on crutches, with nothing but a bag hung from his arm. The village was saturated with an atmosphere of chaos and panic, with rumbling crowds and neighing horses everywhere. In a flustered haste, the villagers were busy sealing windows and locking doors, packing their luggage and urging cattle and sheep into the mountains. No heed was paid to the beggar, except from an old lady from the east side of the village who gave him some food and prompted him to hide in the mountains as well.

“If you would allow me to stay here for one night, I’ll drive away the terrifying monster,” said the old man, smiling while stroking his beard. Amazed by his remarks, the old lady examined him more closely, only to find him hale and hearty with an extraordinary aura about him. Nevertheless, the old lady continued to try and persaude him to leave, but the old man just stood there smiling without saying a word. After her failed attempt, the old lady left her house and made for the mountains.

At midnight, the Nian Beast broke into the village. Upon arrival it felt that the atmosphere was different to how it had been in previous years. Nian quickly noticed that the door of the old woman's house at the east end had large red paper hanging from it, and that the house was brightly lit with candles. The sight sent a shiver through its body as it let out a strange noise. Sensing something was wrong, Nian examined the old lady's house for a moment before rushing over to investigate further.

As it rushed toward the door a sudden "bang, bang, bang" came from the courtyard and brought it to a complete stop. It shuddered all over, not daring to take another step forward. It turns out that Nian was afraid of the colour red, fire and explosions.

As the door to the house opened, Nian caught a glimpse of the old man inside dressed head to toe in a red robe, laughing. Nian took one look at the beggar, turned aroud and fled in confusion.

The next day was the first day of the first lunar month, and the people who had returned from the mountains were surprised to see that the village was safe and sound. The old woman remembered what the beggar had told her the night before and told her neighbours. They ran to her home to find red paper hanging on the door, pieces of exploded bamboo scattered around that were still crackling from the fire, and a few red candles still burning brightly.

The villagers were overjoyed, they had finally found a way to drive off the beast. They all went home, put on new clothes and went around to friends and relatives houses to say hello and make sure everyone was okay.

Word of their story spread to nearby villages until everyone knew how to deter the Nian Beast.

In another version of the story, word did not reach all villages, and those that were not aware of Nian's weaknesses continued to be slaughtered annually. News of this came to Zi Wei Xing Jun (紫薇星君 zǐ wēi xīng jūn) in Heaven who decided it was time to teach Nian a lesson.

One year, when Nian showed up, he knocked it over with a fireball and tied it to a stone column with a thick iron chain. Since then, Nian dared not kill any more people and surrendered himself completely. It became a good beast that protected households from harm.

From that day forth, when the New Year arrived, people would burn incense as a way to thank Zi Wei Xing Jun for the peace he brought to the Lower Realm (下界 xià jiè) – earth, or the human world.

The Monster and the Young Deity, Nian

In this version of the story, the monster is called Xi (夕 xī), and Nian is the saviour.

A long time ago, there was a monster called Xi that would appear on the last day of the year and lay waste to nearby villages. Even the great Zhao Shen was powerless against it. One day, Zhao Shen travelled to Heaven and requested the assistance of a powerful young deity called Nian. Nian wrapped a bamboo stick in red silk and placed it on a fire. The stick crackled and hissed as he beat the monster and finally destroyed him.

Nian as a Species of Animal

There is another version of the Nian story where Nian is not a singluar beast, but a species of animal that live in the mountains and forests.