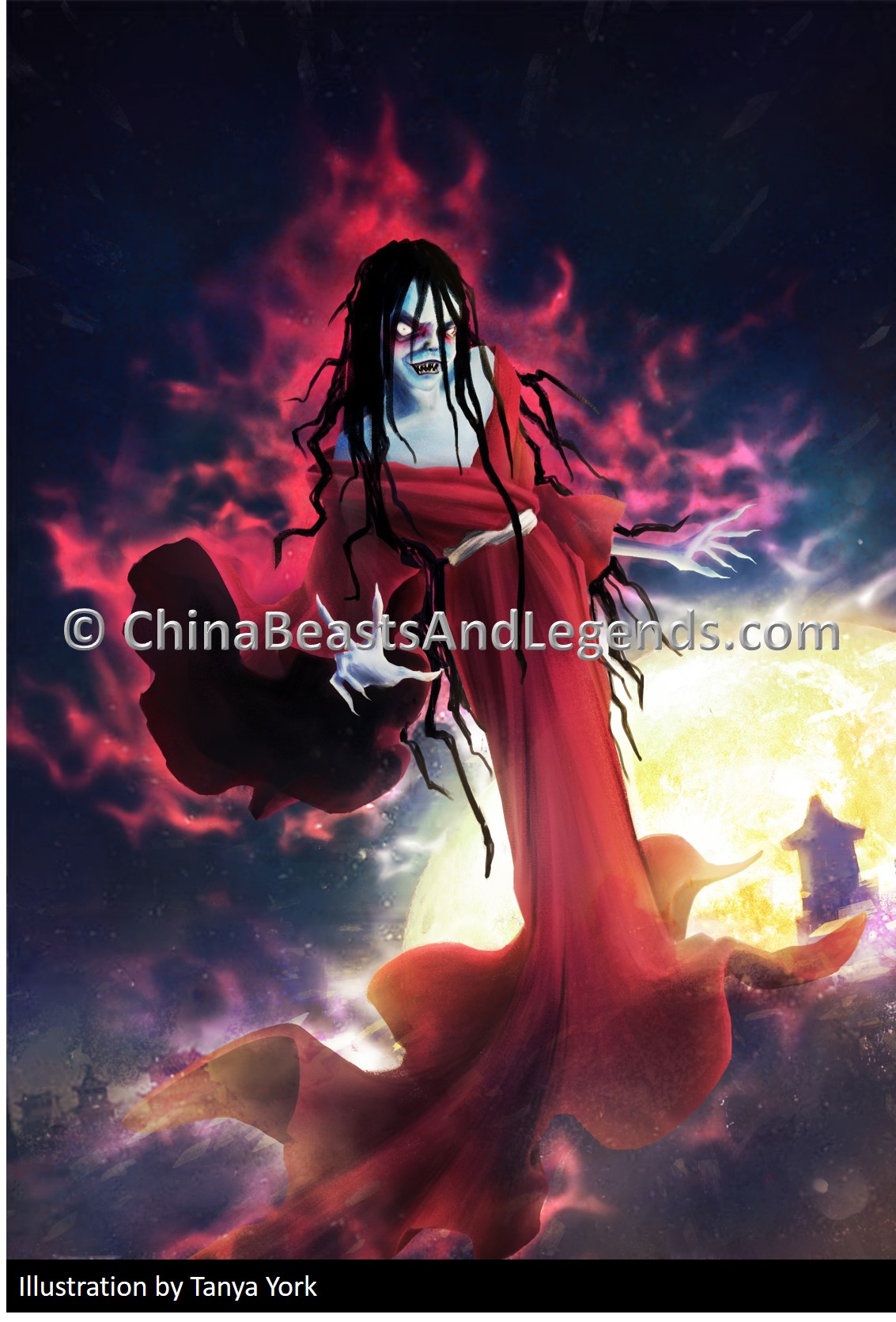 Chinese mythology is home to a vast array of ghost types, the Nü Gui (女鬼 nǚ guǐ) – which translates directly to “female ghost” – is a vengeful female ghost in a white dress with long black hair that has a burning desire to take revenge on the person(s) that caused her misery in life.

Nü Gui come into being when a woman commits suicide after being wronged, or after experiencing some form of injustice when she was alive. According to related folklore, if a woman in one of the aforementioned situations has a red dress on when she commits suicide, the chances of her becoming a Nü Gui are even greater. This is why Nü Gui are oftentimes depicted wearing a red dress rather than a white dress. In such a case, the ghost is referred to as a Hong Yi Nü Gui (红衣女鬼 hóng yī nǚ guǐ), where Hong Yi (红衣 hóng yī) translates directly to “red clothes.”

The reason wearing a red dress increases the chances of becoming a Nü Gui is because, upon death, when the soul enters the Shadow Realm (阴间 yīn jiān), the immortal demons that collect souls and escort them to Di Yu (地狱 dì yù), known as Hei Bai Wu Chang (黑白无常 hēi bái wú cháng), will mistake the soul for that of a living person and ignore it. You see, according to Chinese mythology, if a living person has an out-of-body experience, for whatever reason, their soul may enter the Shadow Realm momentarily before returning to the Earth Realm (阳间 yáng jiān) and their physical body. And since the colour red in Chinese culture symbolises joy, justice and nobility, souls that enter the Shadow Realm wearing red are often mistaken for the souls of the living.

Best known for: Being consumed with hate

There are documented cases in ancient China of the families of women who have committed suicide dressing her corpse in a red dress before performing burial rites in the hope that she will return as a Hong Yi Nü Gui to wreak vengeance upon her aggressor. However, as tempting as this may seem – especially if the aggressor is known to the family and there is little they can do themselves (for example if it were a high-powered official) – to wish a soul to become a Nü Gui is to wish upon them an eternity of torment. It is believed that Nü Gui are unable to take the journey through Di Yu and re-enter the cycle of reincarnation. Instead, they will be forced to roam the Earth and Shadow Realms forever, becoming more and more vengeful with time.

Other Types of Nü Gui

Some ancient folktales have a completely different take on what a Nü Gui is. Some believe that Nü Gui are beautiful female ghosts that can make themselves appear alive, and that seduce men in order to suck out their Yang essence before sending them to their death.