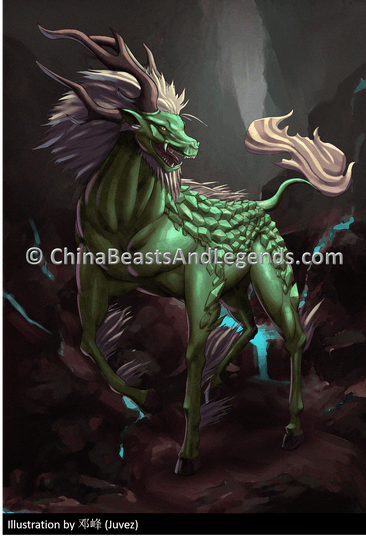 The way Qi Lin have been described to look has changed over the years as they have been used over and over again in different stories for centuries. My understanding is that they were originally described as having the head of a dragon, body of a horse, dragon-like scales all over or partially covering their body, hooves like a horse, a mane that flows upward/outward like fire (often depicted as fire), deer-like antlers, and a long tail also similar to a dragon. They can also be found with only one antler (or horn), which is why they are sometimes confused with the western unicorn.

Qi Lin are often depicted as bejeweled, or with skin as brilliant as jewels, much like Chinese dragons. Their skin is often coloured cyan, with a finish similiar to a precious metal or gem stone. It is said their auspicious voice sounds like the tinkling of bells, chimes, and the wind.

The ancients referred to males as 麒 (Qí) and females as 麟 (lín), but either way, these auspicious beasts were (and still are) revered as the masters of peace and longevity, and are highly regarded by Chinese people. They are also closely associated with child birth.

Due to their deep cultural connotations, Qi Lins can be found all around China as statues in ancient palaces and public spaces, as ornaments in people's homes, shaped in to various accessories, and more recently, tattooed on people's bodies. People pray to these likenesses for protection and blessing (perhaps not to tattoos!).

Best known for: An auspicious beast, loved by all

Given the important place Qi Lin occupy in the heart of Chinese people, it should come as no shock to find out that there are many stories/legends associated with the beast.

It is said that shortly before Confucious (孔子 kǒng zǐ) was born and again before he died (551–479 BC), a Qi Lin came to visit.

In Qu Fu (曲阜 qū fù), on Que Li Street (阙里街 quē lǐ jiē), lived Confucious' soon-to-be mother and father, Yan Zheng (颜徵 yán zhēng) and Kong Ge (孔纥 kǒng gē). They already had a son Kong Meng Pi (孔孟皮 Kǒng Mèng Pí), but he had problems with his legs and was unable to contribute to the family as a consequence. So his parents went to Ni Mountain (尼山 Ní shān) to pray for another son.

One night, a Qi Lin appeared on Que Li Street, and from it's mouth came a jade scroll1 - "麟吐玉书" (Lín tǔ yù shū) - that had the following characters written on it:

Roughly translated in to English: "Descendant of the dragon, the true ruler2 born when the Zhou Dynasty is in it's weakened state, will be born to the virtuous, Yan Zheng."

The next day, a baby cry could be heard from the Kong household. Confucious was born.

1: Jade scroll: not a scroll made of jade, rather, an auspicious scroll.

2: True ruler: A ruler with no land, no subjects, no authority or official title, but one that would be written in to history and whose actions would be remembered forever.

Confusing a Giraffe for a Qi Lin