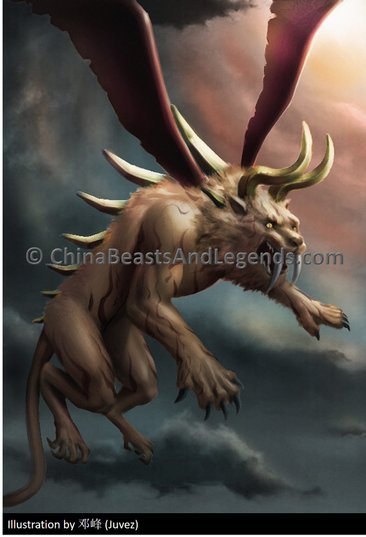 Qiong Qi is one of the Four Fearsome Beasts (四凶 sì xiōng).

According to the accounts provided in the Classic of Mountains and Seas: Central and the Classic of Regions Within the Seas: North, Qiong Qi is described as resembling a tiger with wings that enjoy eating humans, starting from the head.

However, in the account offered in the Classic of Mountains and Seas: West, Qiong Qi is described as resembling a bull, and is covered in hedgehog-like spikes. All accounts agree that Qiong Qi is a fearce beast which enjoy eating humans.

Futhermore, according to legend, Qiong Qi often appears flying overhead during battles. It swoops down to devour the person whose argument is just, bites the noses off of anyone loyal to them, then captures and releases beasts to fight for the wrongdoer, and encourages them to do more bad deeds.

Best known for: One of the Four Fearsome Beasts