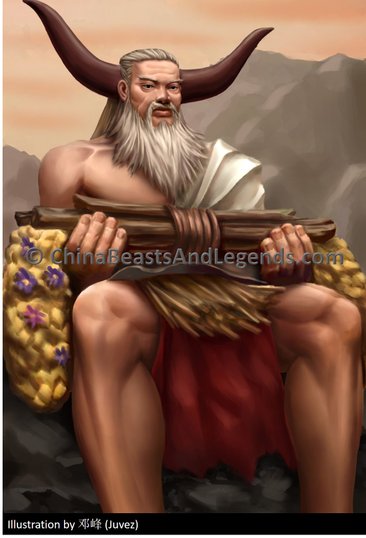 Shen Nong – literally “the Divine Famer” – is a mythical ruler in ancient China from a time before written records began. He is accredited with many achievements and inventions, and is highly revered to this day. As the interpretation of his name suggests, one of Shen Nong’s greatest contributions to the Chinese people was in agriculture, perhaps this is why he is often depicted with two bull horns on his head.

Aside from agriculture, Shen Nong, also known as Emperor Yan (炎帝 yán dì)1, is also, most notably, acknowledged for his contribution to Chinese medicine. According to some versions of the legend Shen Nong has a transparent stomach so he can observe how different plants, minerals and meats react after he digests them. If he digested something poisonous, he would drink a special type of herbal tea2 made from over 70 different herbs to counter the negative effects. Altogether he is thought to have tested hundreds of different “consumables” in an effort to test their medicinal properties.

1 There are two schools of thought amongst historians regarding “Shen Nong” and “Emperor Yan;” one believes that these are two completely separate people who have zero relationship to one another, the other believes they are separate titles for the same man. It should be noted that in Chinese popular culture, the latter is the more prominent of the two.

2 He is also believed to be the “inventor” of tea. As one version of the story goes, leaves from a burning tree were whisked up by the wind and floated into a cauldron of boiling water.

It is said that in the end, after eating the yellow flower of a weed, Shen Nong died from its poison before he could give himself the antidote. For his hard work and sacrifice on behalf of his people, he was given the honourary title of “Medicine King” (药王 yào wáng).

Below is a list of things Shen Nong is accredited with inventing/developing:

3 Five Grains (五谷 wǔ gǔ): There are many different versions of the list, though the most prominent version is soybeans (豆 dòu), wheat (麦 mài), broomcorn (黍 shǔ), foxtail millet (稷 jì), and hemp (麻 má). Though a similar list can be found that replaces the hemp with rice (稻 dào).

Emperor Yan, the Yellow Emperor and Chi You

After suffering a defeat to Chi You (蚩尤 chī yóu) at the battle of Ban Quan (阪泉之战 bǎn quán zhī zhàn), Emperor Yan joined forces with the Yellow Emperor (黄帝 huáng dì) to finally defeat his armies during the battle of  Zhou Lu (涿鹿 zhuō lù).