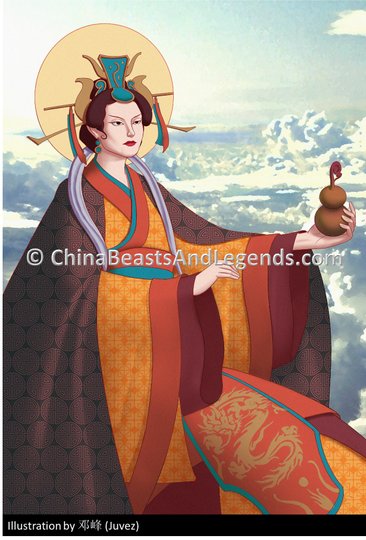 Xi Wang Mu is the highest ranking and most powerful female deity in Chinese mythology, said to be without beginning, and without end. She is the personification of the female Yin (chaos), she protects/presides over all women, female deities, marriage, fertility, and longevity. She takes care of the Immortal Peach Garden in Heaven where the Peaches of Immortality grow (yielding fruit once every 3,000 years). She is known by many names, most commonly in English, perhaps, is the Queen Mother of the West.

Her history is extremely complicated. The first known records of her are in oracle bone inscriptions and date back to the Shang dynasty (商朝 shāng cháo) between 1766 and 1122 BCE, and speak of sacrifices being made in her name. The first detailed description of Xi Wang Mu can be found in the Classic of Mountains and Seas (山海经 shān hǎi jīng), where she is described in a fashion that that couldn’t be further from her current day image; a part-human, part-beast deity, with a feral air about her:

“Another 350 leagues to the northwest lies Yu Mountain. Xi Wang Mu lives on this mountain. Xi Wang Mu looks like a human, but with a leopards tail and tiger teeth. She enjoys (or, “is good at”) howling, and wears jewels in her tangled hair. She governs the Sky Calamities (天之厉tiān zhī lì) and the Five Atrocities (五残 wǔ cán).”

(More research needed, but I believe the Five Atrocities are referring to the five “evil” planets: Mars, Saturn, Uranus, Neptune, and Pluto. In ancient Chinese astrology, celestial bodies (including the Sun and Moon) that are visible to the naked eye, were labelled as either “good,” “evil,” or “neutral.” It is important to mention here that depending on the source, Neptune is sometimes labelled as “neutral.”

Furthermore, I believe the Sky Calamities are referring to devastating natural weather related phenomena, such as, tornados, hurricanes, and lightening, etc.)

Xi Wang Mu’s image began to change with her adoption into the Daoist pantheon. As time went by, through the works of many authors and poets, shortly after the Tang Dynasty (唐朝 táng cháo) (which ended in 907 ACE), her new image was immortalised in a book by Du Guang Ting (杜光庭 dù guāng tíng), a Daoist priest, called the “Records of the Assembled Transcendent of the Fortified Walled City” (墉城集仙录 yōng chéng jí xiān lù). Today, Xi Wang Mu is now most often depicted as a beautiful lady – sometimes elderly – dressed in fine clothes, with an elaborate headdress, usually in court, with a Pill of Immortality (仙丹 xiān dān) or a Gourd (葫芦 hú lu) in one hand. Her Gourd is said to hold the Pills of Immortality.

According to further accounts in the Classic of Mountains and Seas, Xi Wang Mu’s male counterpart, and husband, was Dong Wang Gong (东王公 dōng wáng gōng). If Xi Wang Mu is the “Queen Mother of the West,” then Dong Wang Gong is the “King Father of the East.” However, there are some accounts that state she later became the wife of the Jade Emperor (玉帝 yù dì) – perhaps since Xi Wang Mu is the personification of Yin and the Jade Emperor is said to be the personification of Yang (order) – and that they together went on to have baby deities of their own. This situation is complicated further by the fact that most accounts state that the Jade Emperor did not marry, and then another still that states the Jade Emperor’s wife is Xi He (羲和 xī hé), the Mother of Suns. It is unclear to me which version is correct.

Most accounts, thankfully, agree that Xi Wang Mu lives on Kun Lun Mountain (昆仑山 kūn lún shān) in a perfect paradise where she presides over an entourage of female deities. Her palace is often frequented by other deities, and sometimes mortals, for official meetings, and for those in search of immortality, for Xi Wang Mu is said to grant immortality to those who are worthy and seek her out – much like Hou Yi (后羿 hòu yì).