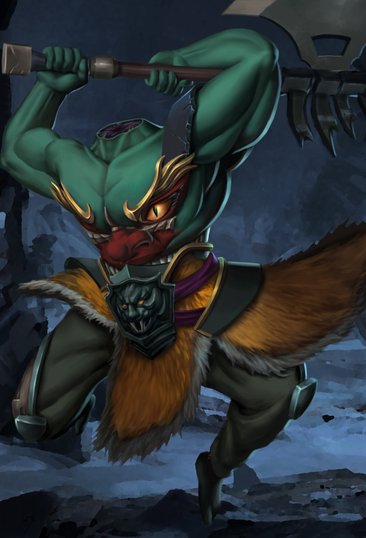 A giant, whose original name is unknown, was given the name Xing Tian after he faced the Yellow Emperor (黄帝 huáng dì) in battle and lost. After having his head cut clean off his body by his advisary, the giant refused to die. His nipples turned into eyes, his navel became his mouth, and the new creature - Xing Tian - picked up his weapon and continued to fight the Yellow Emperor.

Decapatation of a Giant

When Emperor Yan (炎帝 yán dì) ruled the earth, his armies were vast, and feared by most. Amongst his subjects there was a large giant that loved music. He composed a piece named Fu Li (扶犁 fú lí) for the Emperor, and wrote a poem called Harvest (丰收 fēng shōu). His work was collectively known as (卜谋 bo móu) and brought much joy and happiness to the people.

When Chi You (蚩尤 chī yóu) rebelled against the Yellow Emperor, the giant begged Emperor Yan to allow him to join the fight but Emperor Yan wouldn't allow it. In the end, after defeating Chi You, the Yellow Emperor turned on his ally and destroyed what was left of his army. Emperor Yan returned from the battle defeated. The giant was furious.

Best known for: Refusing to die

After fighting his way to the Yellow Emperor's Palace, he stood in front of his enemy with death in his eyes. The Yellow Emperor swiftly took up his sword and the two met in battle. The battle moved from inside to outside the Palace, from the Heavens down to earth, until finally they stood on Chang Yang Mountain (常羊山 cháng yáng shān).

The Headless Giant, Xing Tian, having felt what was going on around him, knew that his head had been burried in the belly of the mountain. He took up his axe and his shield, stood up and raised them to the Heavens. Xing Tian had fallen into an abyss of complete darkness, but he would not be defeated. In that moment, his nipples turned into eyes, and his navel split open to form a mouth. He locked eyes on his foe once more and the two conitnued to fight.

Though Xing Tian was finally defeated, his uncompromising spirit would never be forgotten. His story, and new-found name, spread throughout the country, surviving the test of time until it was finally immortalised in words by a poet, named Tao Yuan Ming (陶渊明 táo yuān míng), during the Jin Dynasty (晋朝 jìn cháo) (266 ACE－420 ACE).