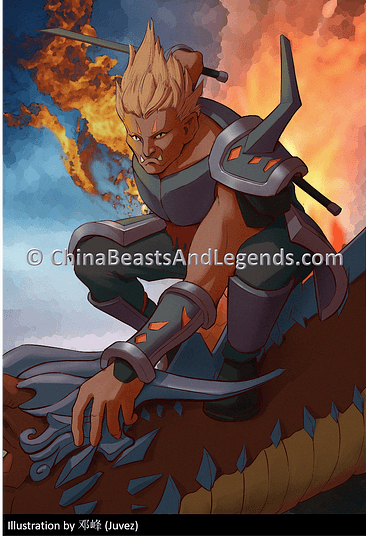 Zhu Rong is the Fire God of the South. In the Classic of Mountains & Seas, he is decribed as having a beast-like body and human face, riding around the sky on two dragons.

He is best known for defeating the Water God, Gong Gong (共工 gòng gōng), in an epic battle across Heaven and earth that ended with Gong Gong, bitter in defeat, crashing in to a mountain and tearing a whole in the Heavens.

For some reason (further research needed) in recent years, artists have started portraying Zhu Rong as a woman, though it is clear from early illustrations in ancient texts that he is, in fact, male.

According to one legend, Zhu Rong is a bit of a musician. It is said that one could often see Zhu Rong at the top of a mountain playing melodious music to the people below, filling them with energy and sparking a new joy for life.

In some texts, Zhu Rong is named Chong Li 重黎 (chóng lí). In this particular legend, Chong Li was appointed the position of Fire Officer (火正 huǒ zhèng OR 火官 huǒ guān) by the Emperor. Chong Li was a man of great merit, a shining example to others, so the Emperor bestowed him with the name Zhu Rong.

融 róng is a symbol of light.

This name was given to him in the hope that he would continue to illuminate the earth with fire, and bring light to the people forever.