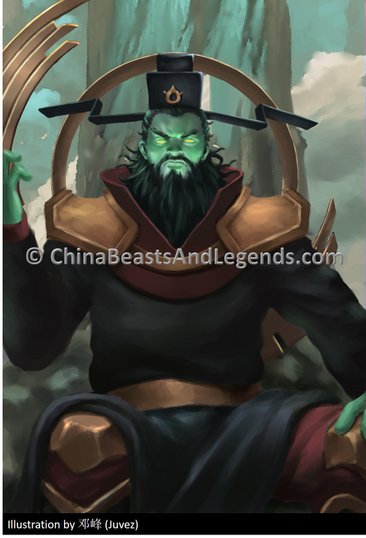 Zhuan Lun Wang1, or King Zhuan Lun, resides in the Tenth Court of Di Yu (地狱 dì yù), where he passes judgement on the souls (魂 hún) that are brought to his domain.

2 The World of Five Turbidities is the world as we know it, defined by;

Unlike the world as understood by an enlightened being, that sees past the Five Turbidities and can escape the never-ending cycle of reincarnation.

3 "the wrong view" is that false reality we invent and construct for ourselves based on our misinformed perception of everything. Wrong views, according to the Buddha, are the source of all harmful actions of our body, speech and mind that trap us in an endless cycle of suffering known as samsara.

Best known for: Presides over the 10th Court of Di Yu

In the Tenth Court there are six bridges - gold, silver, jade, stone, wood and the Nai He Bridge (奈何桥 nài hé qiáo) - it is here that Zhuan Lun Wang meets with and passes judgement on the souls that come before him from any one of the previous 9 courts. Each is judged in accordance with their sins and takes a different bridge across Wang Chuan River (忘川河 wàng chuān hé), the good are separated from the evil and each is sent on their way to be reincarnated on one of the Four Continents4.