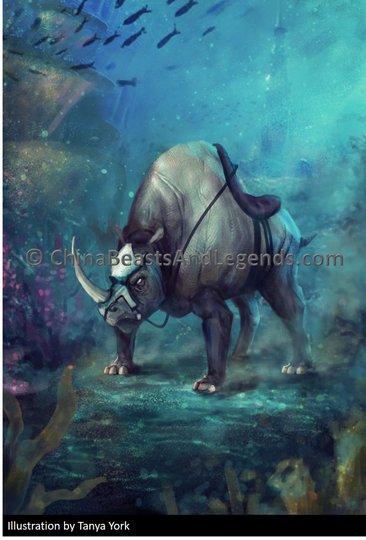 According to legend, Bi Shui Shou - literally "force water beast" - is a rare beast that lives in the water and resembles a rhinoceros. As it's name implies, it has the ability to part water and glide through with ease, creating huge waves on the water surface in its wake.

Bi Shui Shou was first described in a famous book called "the Investiture of the Gods" (封神演义 fēng shén yǎn yì) that was written during the Ming Dynasty (明代 míng dài) (1368 to 1644 ADE). In it's passages it is written that Bi Shui Shou is Ao Bing's (敖丙 áo bǐng) royal steed, and has the ability to manipulate water, just like his master.

Ao Bing rode Bi Shui Shou to investigate the tremors that nearly shook the Crystal Palace (水晶宫 shuǐ jīng gōng) to the ground. The Dragon King, Ao Guang (敖广 áo guǎng) had already sent someone to see what was happening, only to be told soon after that he had been killed.

When Bi Shui Shou and Ao Bing reached the coast, they saw a little boy called Ne Zha (哪吒 né zhā) standing alone in the water. Little did they know, this would be Ao Bing's final battle.