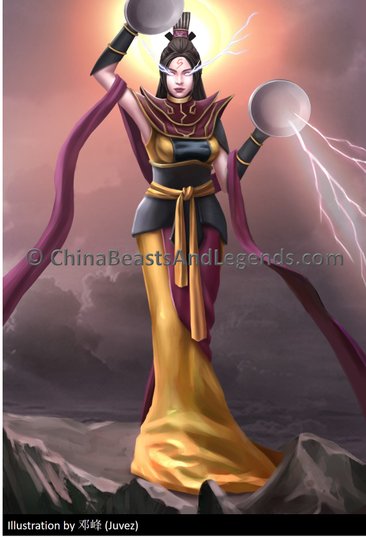 Dian Mu, literally "electricity mother," also known as the Lightning Empress (闪电娘娘 shǎn diàn niáng niáng), is the Goddess of Lightning, and the assistant of Lei Gong (雷公 léi gōng), the God of Thunder, in Chinese mythology. She is a well respected Daoist goddess.

Since the ancients did not fully understand the natural phenomenon of thunder and lightning, a series of legends gradually evolved over time. In the ancient concept, thunder is the god that punishes sins. If a person does bad things or breaks an oath, they may be struck down by a Five Phase Thunder Bolt (五雷轰顶 wǔ léi hōng ding)1 from Lei Gong, which is preceeded by a flash of lightning provided by Dian Mu in order to ensure Lei Gong hits his target.

1 The ancient Chinese believed that everything in the universe was made up of the Five Phases (also known as the Five Elements or Five Agents) - metal (金 jīn), wood (木 mù), water (水 shuǐ), fire (火 huǒ), earth (土 tǔ).

Lei Gong provided Dian Mu with two mirrors that she uses to reflect light from Heaven down onto earth producing what we see as lightning.

In the past, when there was thunder, there was no lightning. Lei Gong, who was easy to anger, would throw caution into the wind and strike people down at will. It wasn't until one day when he killed an innocent and kind-hearted person that he changed his ways.

She was a widow. Her husband had died early in life and they had no son, their family was very poor. But despite her dire situation, she refused to remarry and continued to look after her elderly mother-in-law.

One day, her mother-in-law was especially weak and begged her to cook some meat. But the widow had no money to buy meat, so she cut flesh from her hands to cook for her poorly mother-in-law. Seeing what she had done, the old lady was furious. She assumed that her daugther-in-law had bought meat and ate it for herself. She screamed to Lei Gong to strike her down, and Lei Gong was only too eager to ablige. With a crack and a rumble the sky turned black and the widow dropped down dead.

Seeing her lifeless body on the floor the old lady noticed that flesh was also missing from her thigh. The wound was still fresh. Realising the mistake she had made, she cried and begged the Heavens to bring her back to life. But there was no saving her now.

After hearing the old ladies cries, Lei Gong regretted acting so abruptly and turned to the Jade Emperor (玉帝 yù dì) for help. He requested that the widow be reincarnated as Dian Mu, that she may use mirrors to reflect the light from Heaven onto earth, so that he might distinguish between good and evil before he strikes a person down. The Jade Emperor agreed. This is why lightning precedes thunder.

To read another version of this story, click here.