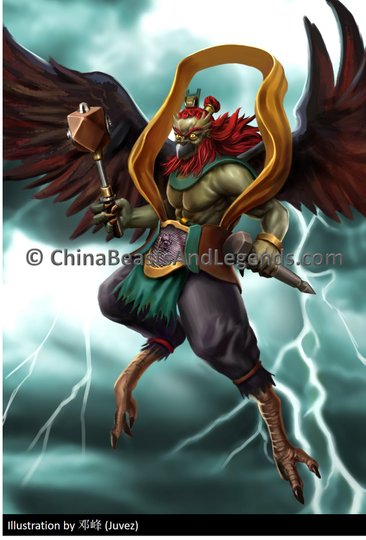 According to Chinese mythology, Lei Gong, also known as Lei Shen (雷神 léi shén) or Lei Shi (雷师 léi shī), is the God of Thunder and Heaven's executioner. The earliest records of him can be found in The Classic of Mountains and Seas: East, where it states Lei Gong was a divine dragon with a human head, who could produce thunder by beating his stomach. Later, his image changed to that of a strong man, barechested, with eagle claws, a pair of wings, and the face of a monkey that has been stretched out to resemble a bird's beak. In some versions his face is red and he has three eyes on his forehead. He is often depicted holding a chizel in his left hand and a mallet in his right hand, with a Kui-Skin Drum (夔鼓 kuí gǔ) strapped around his body. The chizel is used to punish evildoers, and the mallet and drum are used to produce thunder.

The ancient Chinese believed that Lei Gong has the ability to distinguish between good and evil, that he enforces the law on behalf of the Heavens by killing the guilty, and upholding justice. If a person commits a sin or breaks an oath, they will be struck dead by a Five Phase Thunder Bolt (五雷轰顶 wǔ léi hōng ding)1.

Dian Mu (电母 diàn mǔ) - literally "electricity mother" - is Lei Gong's wife. In one version of their story, Lei Gong was originally human. One day he stumbled across a Peach of Immortality (仙桃 xiān táo) and after taking a bite, transformed into Lei Gong.

Lei Gong rose to Heaven where he was instructed by the Jade Emperor (玉帝 yù dì) to observe humans on earth, and punish any evildoers.

However, whenever he struck someone down, the sky would turn black, which caused Lei Gong to miss his target, often resulting in the death of innocent bistanders. One day, a lady was tending to her mother when she noticed the rice she cooked was too hard to eat. She took the pot outside and began to tip it out onto the floor. Lei Gong, who was easy to anger, saw this and decided to strike her down for wasting food. News of the woman's death reached the Jade Emperor who was not amused. He revived the woman and granted her the title Dian Mu, Goddess of Lightning. And since it was Lei Gong who killed her, he had them marry, demanding that Lei Gong take responsibility for his actions.

In order to ensure similar incidents would not occur again, before Lei Gong struck his target, Dian Mu would use mirrors to reflect light from Heaven onto earth, thus illuminating the ground allowing Lei Gong to ensure his aim was true. This is why lightning precedes thunder.

1 The ancient Chinese believed that everything in the universe was made up of the Five Phases (also known as the Five Elements or Five Agents) - metal (金 jīn), wood (木 mù), water (水 shuǐ), fire (火 huǒ), earth (土 tǔ).

To read another version of this story, click here.