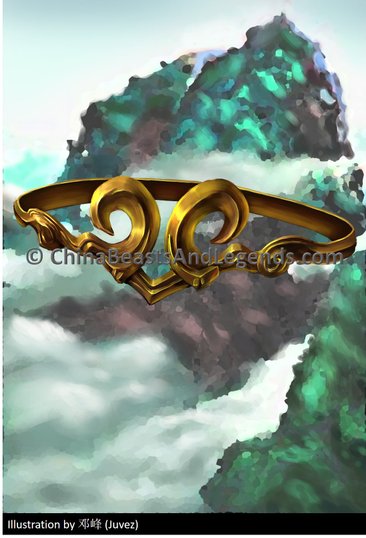 Once it sat on the Monkey King's head, it could not be removed. And should the Monkey King stray from his path, the monk Tang Seng need only chant the spell (mantra) Buddha taught him, and the circlet would tighten around his head causing him excruciating pain.

This term was later used as a metaphor in Chinese for an item that binds someone to something.

After the Monkey King was subdued by Buddha under a mountain, following his rampage through Heaven and Di Yu (地狱 dì yù), and countless other mischievous acts, Buddha knew that his journey to enlightenment was going to be a difficult one, that he would need support - and restrictions - along the way. And since the Monkey King knew arguably no equal, Buddha was going to need to intervene.

Tang Seng placed the circlet on the incapacitated Monkey King before freeing him from under the mountain. And so their journey begun...