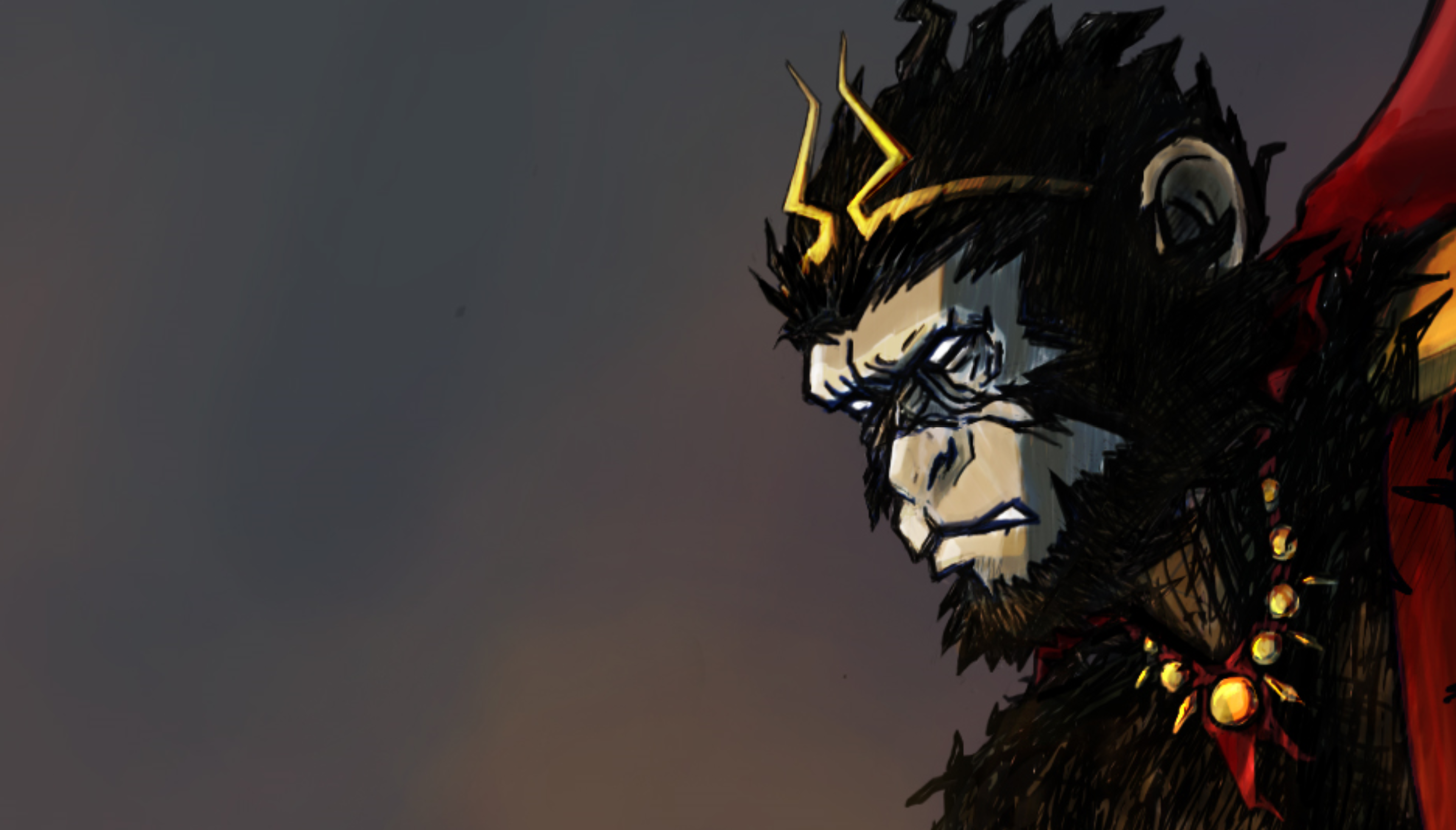 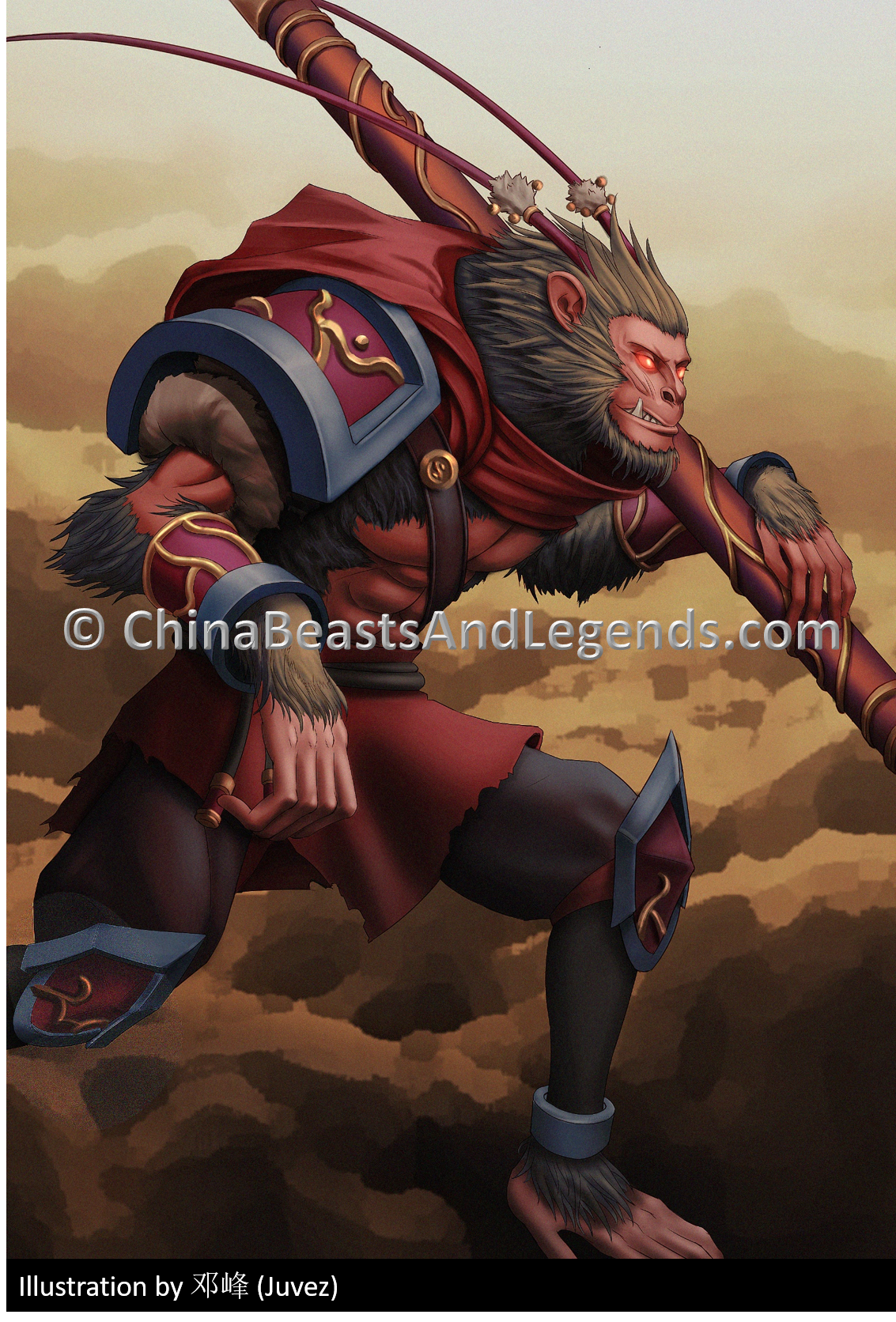 Grow to the Heavens (法天象地 fǎ tiān xiàng de) - the ability to grow to an immense size, beyond the physical realm.

Self-Duplication (身外身 shēn wài shēn) - the ability to control each single hairs on his body, every 84,000 of them. More impressively, he can pluck one out and have it morph into hundreds of monkeys to control at will. When done with them, they return to him and they become one again.

Spirit Travel 元神出窍 (yuán shén chū qiào) - the ability to leave his body in spirit form and travel to other places.

And finally, as if all of that wasn't enough, the Monkey King's original wish, the reason he set out on this epic journey in the first place, came true - his Master taught him the secrets of Eternal Life.

Soon after mastering all of these skills, the Monkey King started showing off to all the other disciples. In fear that he would cause jealousy and could not be trusted with these teachings, Master Puti had no choice but to demand the Monkey King leave. But Master Puti, in all his wisdom, realising that the Monkey King was bound to attract trouble with his new found abilities, advised he go to see Ao Guang, King of the Eastern Sea (敖广，四海龙王), to arm himself for the conflicts that were inevitably coming his way - and boy was he right!

And so, with a heavy heart, the Monkey King left his Master and traveled to the Eastern Sea to meet with the dragon-king where, unbeknownst to him, he was about to receive the weapon he was destined to have from the start- the Wishing Staff, and that his biggest adventures were just about to begin.

Master Puti took an immediate liking to the Monkey King and over the course of seven years, the Monkey King studied scripture, discussed doctrine and listened to the teachings of his Master. When he wasn't learning he was sweeping the cave, tending to the vegetable gardens and his other chores. All was going well until one day his Master told him that the Court of Heaven doesn't actually aprove of this method of attaining immortality, and warned him that they would send down 3 Calamities (三灾 sān zāi), one every 500 years, to try to kill him: (unsure why this method isn't approved by the Heavens. Further reading required)

Other legendary skills Master Puti taught him include:

Cloud Somersault (筋斗云 Jīn dǒu yún) - the ability to jump on to a cloud and use it to travel great distances in a short period of time. It is said that he can travel hundreds of miles with one Cloud Somersault.

Sūn wù kōng, the Monkey King himself. Not sure where to start with this guy. How do you introduce the self-proclaimed "Great Sage, Heaven's Equal" (齐天大圣 qí tiān dà shèng) that dared stand up to the armies of both Heaven and Di Yu (Chinese version of 'Hell'), who removed his name from the Book of Life and Death (生死簿 shēng sǐ bù) and ate all the Peaches of Immortality (仙桃 xiān táo) from the Heavenly Peach Garden (蟠桃园 pán táo yuán)?

One thing's for sure, this monkey is not to be messed with. He wields a magic Wishing Staff (如意金箍棒 Rúyì jīn gū bàng) that weighs 7,960 kg (17,550 lbs) that can expand to the size of the Universe and shrink to the size of a needle, which he "took" from the great dragon-king of the Eastern Seas, Ao Guang's (敖广 Áo guǎng) underwater armoury.

Oh, and did I mention that he is immortal (many times over), can jump the length of the known Universe, stars in his own TV show and has made dozens of movies?

But I digress. Perhaps there is only one place to start, at the beginning, with a single rock located at the top of the Mountain of Flowers and Fruit (花果山 huā guǒ shān), that would soon give birth to the legendary legend of all legends, the Monkey King.

Birth of the Monkey King

Atop the Mountain of Flowers and Fruit (花果山 huā guǒ shān), a mysterious place where wonderous beasts, demons, and monkeys romed, laid a rock. That rock had laid there since the dawn of time and had been absorbing Qi (气 qì) from the Sun ever since. One day the rock changed, it grew a womb, and within no time gave birth to a stone egg.

Best known for: Powerful and mischievous

When the wind blew over the stone egg, out emerged a monkey made of stone that could already walk and crawl. As the monkey looked around, beams of light shot out from his eyes toward the Jade Palace (天宫 tiān gōng) in Heaven and must have caused a fuss because the Jade Emporer (玉帝 yù dì) ordered soldiers to investigate the mysterious blast of light.

The soldiers returned and reported that as the monkey ate and grew, the light began to die out. The Jade Emporer then made possibly the worst decision of his career - he dismissed the monkey as insignificant and carried on with his heavenly day to day activities.

The monkey began exploring the mountain and quickly found other monkey friends to play with. They would play in the river and eat from the bountiful fruit trees, life was good. But young minds are curious, and one day the monkeys decided to venture up the mountain in an attempt to locate the source of the river.

Of course, the Monkey King then held them to their word and was declared king of the monkeys. He then gave himself the first of many titles, "Handsome Monkey King" (美猴王 měi hóu wáng) to mark the occassion.

It is here in Water Curtain Cave that the monkeys lived happily and prospered for hundreds of years under the rule of the Monkey King. But as time went by, the Monkey King became more and more aware of his mortality and finally decided to take matters into his own hands.

The Monkey King's Journey for Immortality

On his 400th birthday, after being told by one of his subjects that there were things in this world that are greater than kings, such as immortals (神仙 shén xiān) and Gods (神 shén), the Monkey King decided he too wanted these titles, and set off across the Great Sea the very next day in search of an immortal in the hope that they could teach him the way.

After years of searching he was pointed towards a place called the Mountain of Heart and Mind (灵台方寸山 líng tái fāng cùn shān) where he found the Cave of the Slanting Moon and Three Stars (斜月三星洞 xié yuè sān xīng dòng). It was here that he finally met his master, Puti (菩提祖师 pú tí zǔ shī), the immortal sage, who agreed to take him on and immediately names him Sun Wu Kong (孙悟空 sūn wù kōng).

What's in a Name?

You see, up until this point, having been born without a mother or father from a rock atop the Mountain of Flowers and Fruit, the Monkey King didn't actually have a name. Master Puti observed that the Monkey King resembled a macaque monkey, which in Chinese is written 猢狲 hú sūn. The second character 狲 is the same as 孙 if you delete the radical on the left 犭which denotes that the character is related to an animal. 孙 is also a very masculine character, connected to sons and grandsons. And 孙 is quite a common family name in China, so it fit perfectly.

Here are some other animal related characters, note that each has the same radical on the left 犭 : 狗 dog, 猫 cat, 猪 pig, 狼 wolf.

The reason Master Puti didn't select 猢 (hú) is because the character 胡 (hú) (without the 犭radical) - which is also a Chinese family name - is a very feminine character, and is associated with the menopause. If the Monkey King were a Monkey Queen, perhaps she would be called 胡悟空 hú wù kōng...who knows?

As for 悟 wù and 空 kōng, well these are a little more difficult to explain. But let's have a stab at in it.

Similar to how western families carry on names through the generations ("Junior" or with numbers, like “”King Henry VIII,“” for example) Chinese families used to have a system for the second character in a persons name. In the example of the Monkey King, he arrived at the Cave of the Slanting Moon and Three Stars when Master Puti was using 悟 (wù). He seemed to have a system of 12 characters he used and just so happened to be on 悟 (wù) at the time. Those 12 characters were:

In accordance with the concept of the Five Phases (五行之气 wǔ xíng zhī qì), Master Puti realised that the Monkey King was overly interested in material things. In Buddhism, the material realm is considered to be a distraction from what is truly important, namely, the spirit world, which is why material things are referred to as 空 (kōng) or 虚空 (xū kōng) - which translated literally means 'empty' or 'void.'

This third character therefore represents the Monkey King himself, and is used as a way of guiding him to a higher state of mind. A wish bestowed upon him by his Master.