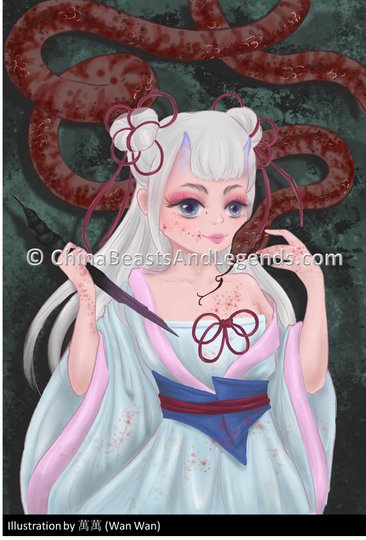 Luo Ji Ya, also known as the Liu Sha Sprite (流沙仙子 liú shā xiān zǐ), specialises in poison. She is ranked as the Greatest of the Top Ten Poison Deities of the Great Wilderness (大荒第一毒神 dà huāng dì yī dú shén). She is also ranked number two of the Ten Great Enchantresses of the Great Wilderness (大荒十大妖女之二 dà huāng shí dà yāo nǚ zhī èr), topped only by Yu Shi Qie (雨师妾 yǔ shī qiè). She lives on Liu Sha Mountain (流沙山 liú shā shān), where the earth is vile and not a single blade of grass can grow.

Hidden beneath her innocent but vicious facade is a string of traumatic events that explain why she became a poison deity. As the illegitimate daughter of a powerful leader in the Tu ethnic group (土族 tǔ zú) called, Gong Sun Chang An (公孙长安 gōng sūn cháng 'ān), she was severely mistreated and bullied from a very young age. Her mother, who was of low social standing and shunned because of her affair with Gong Sun Chang An, eventually died from the abuse she too received. As an act of revenge, Luo Ji Ya learnt the art of poisoning from Gong Sun Ying Hou (公孙婴侯 gōng sūn yīng hóu) - her uncle - and at the age of 10, used it to kill her own father, and all the members of his legitimate family. Then she fled her home.

Some time later, whilst collecting herbs for her various concoctions, she came across the deity Shen Nong (神农 shén nóng), the 'father of Chinese medicine.' All the while, little did she know, her uncle, who had been tracking her since she fled, had found her. After poisoning her, as she had his brother, he left her for dead. But soon after, Shen Nong found her and used his medicinal skills to save her. From that moment, Luo Ji Ya fell in love with Shen Nong and vowed to love him forever.

Best known for: Poisoning her family at 10

Once recovered, Luo Ji Ya took her revenge on her uncle. Knowing that he was skilled in the art of poison, she decided to punish him and his mother another way - by kidnapping his young brother, Gong Sun Qing Yang (公孙青阳 gōng sūn qīng yáng). She took the toddler from his home and left him in the middle of the great wilderness to fend for himself, never to see his brother or mother, again.