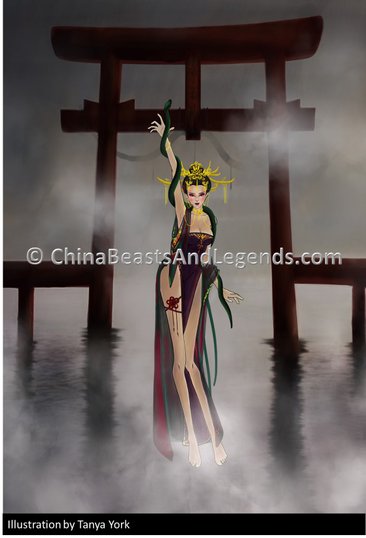 Yu Shi Qie is the leader of a country called Yu Shi (雨师国 yǔ shī guó), and is the strongest of the Ten Great Female Demons of the Wilderness (大荒十大妖女 dà huāng shí dà yāo nǚ).

She is a beautiful woman unlike any fairytale princess you've ever heard of. She has a snake on each arm, a green snake on her left ear and a red snake on her right ear. Her beauty is said to be intoxicating, and her snakes terrifying.

She can control and manipulate dragons, as a result she is also known as Dragon Woman (龙女 lóng nǚ), Dragon Aunt (龙姑 lóng gū), and Dragon Concubine (龙妃 lóng fēi).

** a Sash (绫 líng) is a long piece of fabric used in ancient times made from a kind of thin but fairly stiff silk. In mythology they have magical powers and can be used to attack or defend the wearer at will. Ne Zha and the Monkey King also have Sashes.