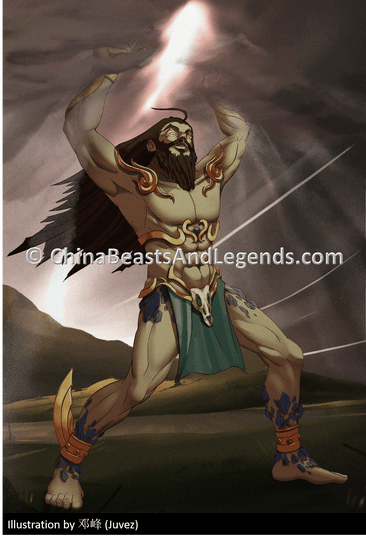 In the beginning, Heaven and Earth were not separated and the Universe was nothing but a chaotic mass. Pan Gu was born within the chaos where he lay and grew for 18,000 years.

When he finally opened his eyes he could see nothing but the chaos that surrounded him. Angry and confused he felt around and picked up an axe (开天斧 kāi tiān fǔ), he swung it hard toward the chaos and with a loud thunderous clap, the chaos separated. All light things rose to form the Heavens and all heavy things fell to form the ground.

Afraid that the two would once again join and he would be forced back in to the mass of chaos from whence he came, Pan Gu planted his feet firmly on the ground and began to lift the Heavens. With every day that passed the Heavens rose a foot, the ground thickened by a foot, and Pan Gu himself also grew a foot.

In the end it is said that he grew to a height of 90,000 leagues, a towering giant standing motionless, like a pillar between Heaven and Earth, preventing them from ever joining again.

He stood, alone, for 18,000 years before deciding that the structures of Heaven and Earth had taken shape and there was no fear of them ever returning to their original state. In great need of rest he fell to the ground and in that moment his body began to change. The breath he exhaled from his mouth became the wind and clouds, his left eye became the Sun, his right eye became the Moon, and his hands, feet and body became the Four Pillars of Earth and Five Famous Mountains. His blood became the rivers, his veins became roads, and his muscles became fertile land. His hair became the stars in the sky, and his body hairs became the flowers, grass and trees. His teeth, bones and bone marrow became shiny metals, hard stones and precious gems. And even his sweat became rain and dew.