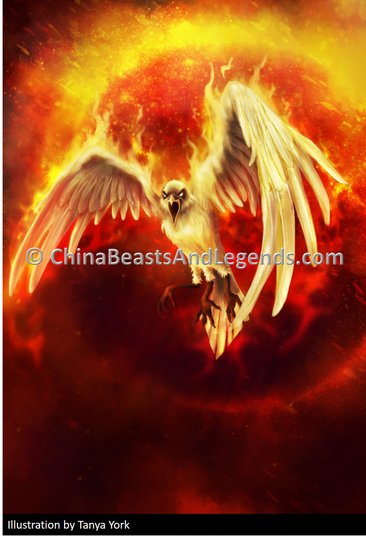 In accordance with Chinese mythology, there is a divine Three-Legged Crow at the centre of the Red Sun, surrounded by a brilliant golden light.

Three-Legged Crows are often referred to as Three-Legged Golden Crows (三足金乌 sān zú jīn wū), Golden Crows, or Crimson Crows (赤乌 chì wū), and can be found depicted with either black, red, or golden feathers. However, they were not shown as having three legs until the latter part of the Western Han Dynasty (206 BCE - 24 ADE), prior to which they only had two.

The 10 Suns Sorch the Earth

As the story goes, Di Qun (帝俊 dì qūn), an ancient God according to the Classic of Mountains and Seas (山海经 shān hǎi jīng), and his wife, Xi He (羲和 xī hé), had ten sons. Each son was a Three-Legged Golden Crow, a sloar deity, charged with taking it in turns to travel across the sky in a charriot driven by their mother to nourish the earth.

The ten young brothers, when not traveling across the sky, would perch on a red mulberry tree, called the Fu Sang (扶桑 fú sāng), in the East at the foot of the Valley of the Sun. There they would play, and wait, until they were summoned by their mother again.

One day the brothers decided it would be fun to travel up into the sky together, and so they did, with devastating results. The earth burned, the seas dried up, plants died, and the people suffered. Hearing of this, the Jade Emporer (玉帝 yù dì) ordered the Great Archer, Hou Yi (后羿 hòu yì) to take up his bow and shoot the disobedient Suns down.

Best known for: Embodying the Sun

Hou Yi did as ordered and shot the Suns down, one by one, until only one brother remained. The people rejoiced and praised Hou Yi for saving their lives. Whilst Di Qun and Xi He mourned the death of their sons.

To learn more about the different versions of this story, and what happened to Hou Yi , check out this page: Chang 'E (嫦娥 cháng é).