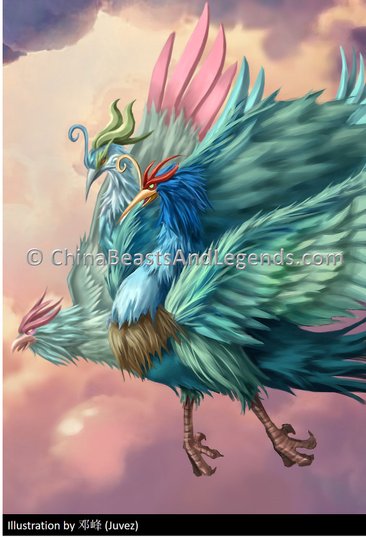 Legend has it that the Cyan1 Birds are messengers for the Queen Mother of the West (西王母 xī wáng mǔ) who lives in the western paradise on Kun Lun Mountain (昆仑山 kūn lún shān).

1 The colour 青 (qīng) in Chinese is somewhat ambiguous, it can be translated to blue, green, cyan, turquoise, and sometimes even black.

The three divine birds have beautiful vibrant feathers, and are light and graceful in the air. They are thought to be the prelife2 of the Feng Huang (凤凰 fèng huáng).

2 Where "prelife" refers to the life prior the last reincarnation cycle.

They were once large birds of prey, strong and dexterous flyers, but gradually they transformed into stunning, auspicious creatures.

In some versions of the legend, there is only one Cyan Bird with three legs. In another, all three Cyan Birds have three legs. There are also accounts claiming that the birds were not only messengers, but also the Queen Mother of the West's servants. They would bring her food and water, and do her bidding.

Best known for: Serving the Queen Mother of the West