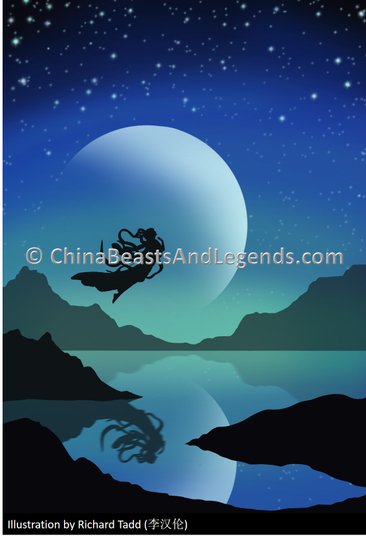 Chang'E was the wife of Hou Yi (后羿 hòu yì), the Great Archer that shot down 9 of the 10 Suns after they caused drought and famine across the lands when they suddenly appeared in the sky simultaneously.

The 10 Suns were the sons of Di Qun (帝俊 dì qūn), Three-Legged Crows (三足乌 sān zú wū) that resided in and represented each of the Suns. The Three-Legged Crows, are often referred to as “Sun Crows" (阳乌 yáng wū) or "Golden Crows" (金乌 jīn wū).

The Golden Crows perched on a red mulberry tree called the Fu Sang (扶桑 fú sāng) in the East at the foot of the Valley of the Sun. Each day a single crow would be taken around the world on a carriage by the "Mother of Suns," Xi He (羲和 xī hé). The carriage was drawn by six dragons.

One day, all 10 Suns appeared in the sky at the same time, scorching the earth, destroying crops and drying up the rivers and oceans. Seeing the devastation they had caused, the Jade Emporer (玉帝 yù dì) sent for Hou Yi to teach them a lesson.

From here, things get a little complicated. There are many differnt versions of Chang'E and Hou Yi's story, some tied in with Tian Gou (天狗 tiāngǒu), and some of which I will attempt to summarise here.

In this version of their story, Chang'E and Hou Yi originally resided in Heaven. When the

Best known for: Floating up to and living on the Moon

10 Suns appeared in the sky, the Jade Emporer summoned Hou Yi who floated down on a cloud to the nearest mountain, and started picking them off one by one. He left one Sun alive to keep the earth warm.

Upon hearing what Hou Yi had done to the Suns, the Jade Emporer banished him and his wife from Heaven and took away their immortality (one can only assume the Jade Emporer wanted them scared or dealt with in a less severe manner, not killed).

Though Hou Yi was revered on earth, he longed to return to Heaven with Chang'E. After learning that the Queen Mother of the West (西王母 xī wáng mǔ), who lived on Kunlun Mountain (昆仑山 kūnlún shān), had a supply of the Elixir of Immortality (仙丹 xiāndān), he sought her out.

After a long and arduous journey he finally reached the Queen Mother of the West's Palace and to his delight, after hearing his story, she gave him what he seeked. She told him that drinking half would grant him immortality, and drinking the whole elixir would send him back to Heaven. Delighted that he and Chang'E could spend the rest of time together as immortals, he returned home.

Upon arrival, he shared the great news with his wife then laid down to rest. However, when examining the elixir, Chang'E, who longed to return to Heaven could not resist drinking the entire thing. She felt her body become weightless and started floating towards the sky.

Since she was banished from Heaven, and could no longer stay on earth, Chang'E had no choice but to fly toward the Moon, where she remains to this day.

Now things get really complicated. With Chang'E and Hou Yi as mortals, there are multiple versions within versions and depending where you look, you will see both characters being portrayed as varying levels of good and evil.

They all start the same, the 10 Suns appear in the sky, however, this time, instead of being summonded by the Jade Emporer from Heaven, Hou Yi was either summonded from earth, or, he took it upon himself to take down the Suns in an attempt to save humanity.

In some versions Hou Yi urges the Suns to spare humanity before shooting warning shots at them. When both are ignored, he begins shooting them down. In other versions he just starts shooting immediately.

When the Suns are hit in some versions they explode, in some they turn back in to Three-Legged Crows, and in others, they simply die.

In some versions Hou Yi stops shooting at 9 because he wants to leave one Sun to keep the earth warm, in another he only brought 9 arrows, and in another, Di Qun and Xi He beg Hou Yi to show mercy to their last living son.

And once the deed is done, as far as I can tell, all versions agree that it was the Queen Mother of the West that comes to Hou Yi after hearing about his great feat, and bestows upon him an Elixir of Immortality.

Then, there are alternative endings as well. In one version, Hou Yi cannot stand the idea of being separated from his wife, Chang'E, so he asks her to store the elixir for safe keeping. However, one of Hou Yi's students, Pang Meng or Feng Meng (逢蒙 féng méng), wanted the elixir for himself so when Hou Yi was out hunting one day, he tried to take it from Chang'E. Realising Feng Meng's intentions, Chang'E quickly drank the elixir and began to rise to the Heavens. Not wanting to leave Hou Yi, she floated to the Moon - the closest place in Heaven to the earth - so that she could remain close to her beloved husband.

In other versions Chang'E took the elixir through an act of pure selfishness, she took it to maintain her youth, she took it because Hou Yi was unfaithful to her, and there is even a version where Hou Yi claims himself king and becomes a tyrant so Chang'E takes the elixir to ensure his reign would some day come to an end.

As far as I can tell, the version where Chang'E "sacrifices" herself before Feng Meng can take the elixir is the most popular version as this is the official story behind the celebrations for the Mid-Autmn Festival:

After Chang'E floated away, Hou Yi missed her intensely. He would often be found looking up to the moon (where it is said if you look close enough you can still see Chang'E,) with teary eyes. And on each full moon he would place plates of her favourite foods out on tables for her. As time went on, other locals starting placing offerings on tables and prayed to Chang'E, the Lunar Deity, for good luck and protection.

Chang' E and the Moon Hare

Legend has it Chang' E is not alone on the moon, that she is accompanied by a Moon Hare (月兔 yuè tù). Now how the Moon Hare got there is subject to debate, there are many different versions of this story. Check out the Moon Hare for more information.