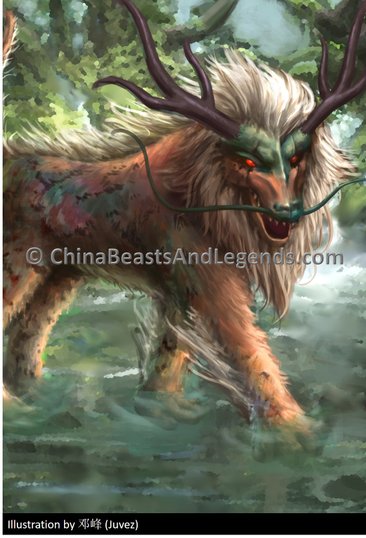 According to legend, Ya Yu was originally an honest and kind deity, but one day he was killed by another God called Wei (危 wēi). The Jade Emperor (玉帝 yù dì) took pity on Ya Yu and had him reincarnated but what he hadn't intended on was Ya Yu being reborn into a new form, one with the body of a feline and the head of a dragon, with a thirst for human flesh and a fierce nature.

There are other descriptions of what Ya Yu looks like, such as, a dragon body with a human face that is the size of a fox, a giant beast with a tiger body and a dragon head, and even another with a human body and snake head. Regardless of the description, the story is always the same. Once the Jade Emperor realises what he has created, he orders Hou Yi (后羿 hòu yì), the Great Archer, to hunt him down and kill him.

In another version of the legend, during the time of the Yellow Emperor (黄帝 huáng dì), there were two deities, one named Ya Yu, and another named Er Ze (二负 èr fù), both of which had a serpant body and human face. One day, Wei encouraged Er Fu to kill Ya Yu, and when the Yellow Emperor found out, he was furious. He had Wei executed and severely punished Er Fu for his crimes. He then had Ya Yu taken to Kun Lun Mountain (昆仑山 kūn lún shān) - where the Queen Mother of the West (西王母 xī wáng mǔ) resides -  and ordered Ya Yu be brought back to life with the Elixir of Immortality (仙丹 xiān dān).

However, when Ya Yu came to he was confused and fell into the waters under Kun Lun Mountain. In the water he morphed into a red ox with a human face and horse hooves that made a sound simliar to a baby crying. On the tenth day he emerged from the water and threatened to devour the locals. Hou Yi was summoned and Ya Yu was the first beast to fall to his arrows.