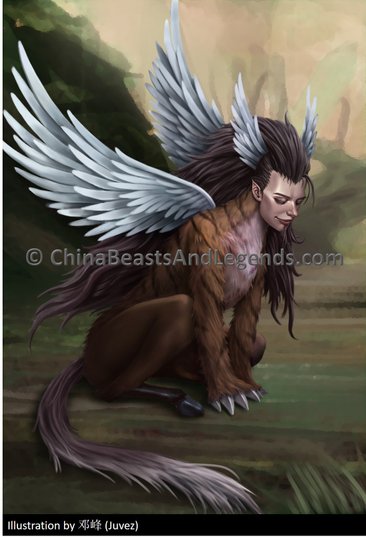 Huai Jiang Mountain (槐江之山 huái jiāng zhī shān) is the Garden of the Heavens (帝之平圃 dì zhī píng pǔ) and is overseen by a deity called Ying Zhao (英招  yīng zhǎo), with the body of a horse, the face of a human, tiger stripes and the wings of a bird. Ying Zhao flies across the Four Seas (四海 sì hǎi)1 as a messenger of heaven, his voice like a booming crash.

In addition to overseeing the heavenly garden, Ying Zhao is responsible for taking care of a group of sacred beasts called Tu Lu (土缕 tǔ lǚ). They resemble sheep but have four horns on their heads and like to eat humans. Ying Zhao, however, does not allow them to indulge in their favourite pastime.

Ying Zhao is also responsible for guarding a group of sacred birds named Qin Yuan (钦原 qīn yuán). Ying Zhao also restricts their diet by forbidding them to eat humans, or any other living creature.

Futhermore, Yingzhao is also responsible for protecting six-headed birds, as well as dragons, serpents, leopards, and various other nameless plants and animals that can be found on earth.

And finally, it is written that Ying Zhao took part in countless battles against evil over the centuries, and that it was he who finally killed Xiang Liu (相柳 xiàng liǔ) - the nine-headed snake, Gong Gong's (共工 gòng gōng) right-hand man.

Best known for: Residing over the Garden of Heaven on Earth