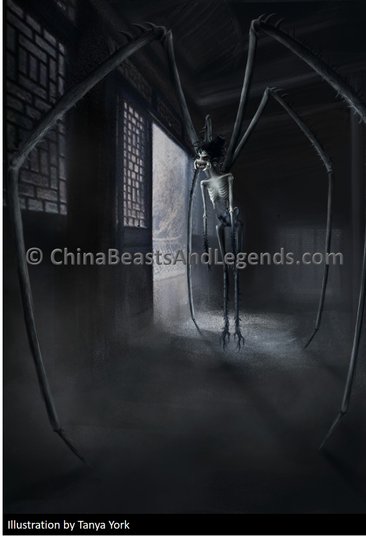 In the story of the Monkey King (孙悟空 sūn wù kōng) - Journey to the West (西游记 xī yóu jì) - there are seven Spider Demons. Each one started as a normal spider that cultivated themselves for a thousand years until they were able to take human form. The seven spiders changed into seven beautiful young ladies with evil hearts, they wanted nothing more than to eat the flesh of the Monkey King's master, Tang Seng (唐僧 táng sēng), which is said to make the consumer immortal and forever young (长身不老 cháng shēn bù lǎo). They chose the wrong path.

One day, Tang Seng strayed into their lair - Silk Web Cave (盘丝洞 pán sī dòng) - and was caught by the Spider Demons. The Monkey King and Zhu Ba Jie (猪八戒 zhū bā jiè) - also known as "Pigsy" - followed in an attempt to save him, but after realising the enemy was seven beautiful women, the Monkey King did not want to fight them. Instead, as they were showering together, the Monkey King snuck in and stole all of their clothes. What he didn't take into consideration was that Pigsy would be ensnared by their beauty, and momentarily joined Tang Seng as their captive.

The seven Spider Demons took their prey to their brother (an honourific term - they are not related), the Centipede Demon (蜈蚣精 wú gōng jīng), to share their feast. The Centipede Demon took male form, dressed in a Daoist robe, underwhich his body was covered in dozens of eyes which shone with a brilliant golden light.

The seven Spider Demons wielded Three-Foot Swords (三尺宝剑 sān chǐ bǎo jiàn) and shot silk webs from their navels, but they were no match for the Monkey King. One by one, they fell.