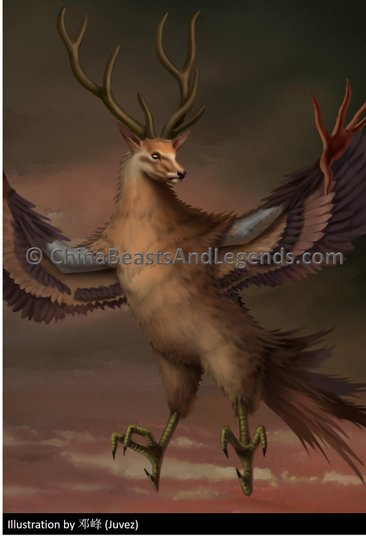 Feng Bo1 is a title meaning "Wind Bo" - where "Bo" is a rank of nobility. His name is Fei Lian (飞廉 fēi lián), and he was once one of Chi You's (蚩尤 chī yóu) blood brothers.

Feng Bo is described as having a deer-like body, covered with leopard-like patterns, the head of a peacock, grotesque horns, and a snake-like tail2.

During the time of the Yellow Emperor (黄帝 huáng dì), Fei Lian was Chi You's apprentice and right-hand man. They both studied under the same True Daoist Master (真道人 hēn dào rén) on Qi Mountain (祁山 qí shān) where they cultivated themselves for many years.

One day whilst cultivating himself on Qi Mountain, Fei Lian noticed a rock on a mountain in the distance that would fly in the air, much like a swallow, every time the wind picked up and rain fell. Then, when the wind and rain subsided, the rock would float back down to it's original resting place where it lay until the cycle repeated itself again. He grew curious and kept a close eye on the rock from that point onwards.

One night, the rock broke it's pattern. In the blink of an eye, and without warning, it suddenly started to move along the ground, despite having no legs, but now it seemed more like a large cloth bag than a rock.

Best known for: God of Wind

As Fei Lian stared in amazement from a distance, he thought he saw the thing take two deep breaths before shooting up into the sky. Suddenly, a violent wind blew towards him, carrying dirt, sand, and rocks along with it. With a tremedous amount of skill and agility, Fei Lian maneuvered himself through the wind toward the object and grabbed it. And it was only once he had it in hand that he realised what he had been observing all this time - "the Mother of Wind" (风母 fēng mǔ), that which was in control of the eight winds3.

Fei Lian proceeded to learn all about how to control and summon winds from the Mother of Wind until he finally mastered the skill. From then on, Fei Lian was known as Feng Bo.

Chi You and the Yellow Emperor

In an attempt to defeat the Yellow Emperor's armies, Chi You called upon his brethren, Feng Bo and Yu Shi (雨师 yǔ shī), to use their wind and rain magic to his advantage. But the Yellow Emperor was cunning. He had summoned Han Ba (旱魃 hàn bá), the Goddess of Drought, to defend against Yu Shi's rain, and used an anemometer invented by Feng Hou (风后 fēng hòu) to identify which direction the winds created by Feng Bo were coming from. In the end, though Chi You and his armies fought well, the Yellow Emperor emerged victorious.

After the defeat, Feng Bo agreed to become the God of Wind.

It is said that whenever an Emperor ventures out, Lei Gong (雷公 léi gōng) - the God of Thunder - clears the way, Yu Shi sprinkles rain on the path, and Feng Bo uses his winds to sweep the floor infront of him.