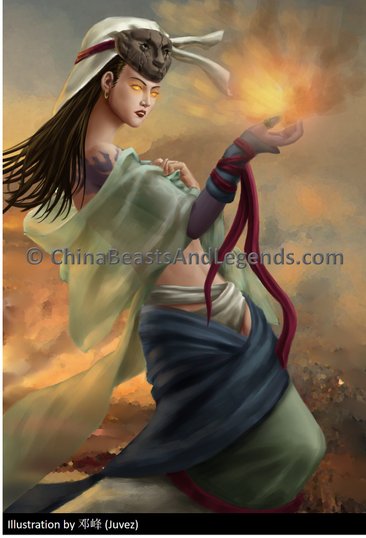 Nü Ba is the Goddess of Drought and is said to be the daughter of the Yellow Emperor (黄帝 huáng dì).

According to the Classic of Mountains and Seas (山海经 shān hǎi jīng), in the battle of Chi You (蚩尤 chī yóu) and the Yellow Emperor, Chi You called upon Feng Bo (风波 fēng bó) and Yu Shi (雨师 yǔ shī) (the Gods of Wind and Rain, respectively) to deal with Ying Long (应龙 yīng lóng), a celestial dragon with wings that could control the rain, that was fighting alongside the Yellow Emperor.

To counter their combined strengths, the Yellow Emperor requested the assistance of Nü Ba who was able to push back the heavy storms created by Feng Bo and Yu Shi.

In the end, the Yellow Emperor and his armies were triumphant.

To this day there is still a lot of debate as to whether or not Nü Ba and Han Ba (旱魃 hàn bá) are the same person. Despite where you stand on this debate, it cannot be denied that there are many similarities between the two.

Version 1: Nü Ba was originally a goddess, but after the Battle of Zhuo Lu (涿鹿之战 zhuō lù zhī zhàn), she was denied to return to Heaven. Over time, she gradually lost her mind and changed into Han Ba.

Version 2: Nü Ba sacrificed herself to save Ying Long. Her Hun and Po1 split and she turned into Han Ba.

Best known for: Goddess of Drought

1 According to Daoism, the soul is made up of 10 individual components; these are known as the 3 Hun (魂 hún) and the 7 Po (魄pò). Put simply, the 3 Hun – often referred to as the “cloud spirits” – make up the ethereal component of a soul, and the 7 Po – often referred to as the “white spirits” – make up the corporeal component of a soul. Upon death, the 7 Po dissipate along with the body, and the 3 Hun each take separate paths.

Version 3: Han Ba is a descendant of Nü Ba.

Version 4: One of the most ancient Gods, Hou (犼 hǒu), was formed from the skull of Pan Gu (盘古 pán gǔ), and because of his playful nature, he caused chaos and havoc throughout the mortal realm. In order to protect their children from his wrath, Fu Xi (伏羲 fú xī) and Nu Wa (女娲 nǚ wā) placed him in a magic seal which tore his Hun and Po apart. But Hun and Po seperated into three parts, escaped the seal and entered the body of three individuals, creating; Ying Gou (赢勾 yíng gōu), Hou Qing (后卿 hòu qīng) and Han Ba. Han Ba was the daughter of the Yellow Emperor.

Later generations believed that Han Ba was the highest state a Jiang Shi (僵尸 jiāng shī) could attain through self-cultivation.