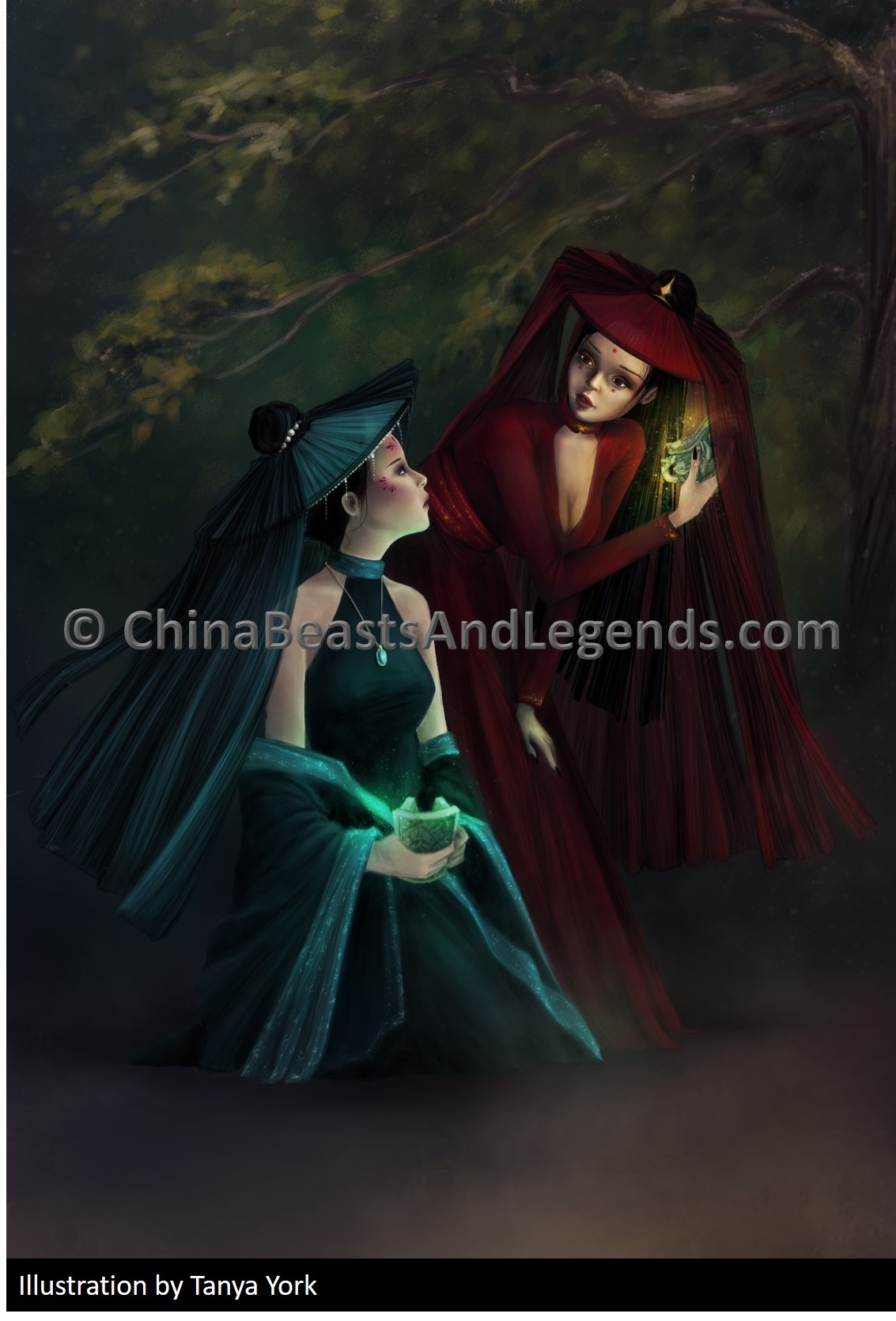 The two witches, Ji & Qi1, first appear in the Classic of Regions Beyond the Seas: West, in an entry that states:

"Nü Ji and Nü Qi are to the north of [that place]2, and live between two rivers. Qi holds a container made from the horn of a Si3 and Ji holds a Zu4."

2 [that place] refers to the sentence prior in the text that describes the location where Xing Tian (刑天 xíng tiān) and the Yellow Emperor (黄帝 huáng dì) fought their legendary battle.

3 Si (兕 sì) is the name of an ancient beast that lived - in accordance with the Classic of Mountains and Seas - that is shaped like an ox, is covered in black fur, and has a single horn growing on its head. This kind of container was used during sacrifical rituals.

Beynd this text I have been unable to find any further information on Qi. However, there is another female character in Chinese mythology that shares the same name as Ji (女祭 nǚ jì) and though there is some debate as to whether or not they are the same person, the general concensus is that they are.

Best known for: Ji's escape to the east

Nü Ji was a smart and beautiful girl. Her mother was named Ma Tou Shan Mu (马头山姆 mǎ tóu shān mǔ), and her father was Lei Gong, the God of Thunder (雷公 léi gōng). As the the story goes, Ma Tou Shan Mu was pregnant for nine thousand nine hundred and ninety-nine years before Nü Ji was finally born. One day, a lucky star appeared in the sky, the mountains rumbled and out came a plump, white little girl. Seeing the golden light gleaming all over her, the Moon Princess (月亮公主 yuè liàng gōng zhǔ)5 was very happy and bestowed upon her a dress adorned with golden balls and precious jade.

5 Unclear if the "Moon Princess" is referring to Chang E (嫦娥 cháng é), or Nü Ji's mother as very little is known about the latter.

Nü Ji Travels East
Nü Ji had two older sisters. The eldest sister was named Nu Jiang (怒江 nù jiāng), who was short-tempered and often got angry for no reason; the second sister was named Lan Cang Jiang (澜沧江 lán cāng jiāng), who was impatient and restless. The three sisters grew up together and were always by one another's sides, day and night. One day they heard that their parents were going to marry them off to suitors in the West, the eldest sister immediately became angry and started to yell and scream; the second sister became anxious and stomped her feet in protest; but Nü Ji remained silent. She smiled and whispered to her sisters for a while then much to their parents delight, the eldest sister stopped yelling, and the second sister stopped stomping.

On the night before the wedding the three sisters joyfully cleaned up and prepared the house. After seeing how happy their daughters were, their parents went straight to bed and slept easy. Early the next morning, suona's6 sounded out continunously as the grooms' families made their way to their home. Their mother rushed to their room to ask them to take a seat on their bridal sedan chairs only to find the room was empty. The sisters had run away without a trace.

6 Suona (唢呐 suǒ nà), often referred to as a laba or haidi, is a Chinese sorna (double-reeded horn).

They would later learn that Nü Ji heard from their neighbor that there is a fun place in the sea to the east where a very handsome East China Sea Prince resides. Nü Ji had already made up her mind to go to the east, where the golden sun rises, to meet him. She had whispered promises of an exciting and happy life to her sisters and invited them to join her.

Knowing their daughters well their parents were certain that it was Nü Ji who had instigated the "escape". Filled with fear and anger they quickly told their two sons Yu Long (玉龙 yù lóng) - eldest of the two - and Ha Ba (哈巴 hǎ bā) to head to the East China Sea and bring their sisters home, adding "if you allow them to escape, don't ever bother returning to this house!"

Yu Long picked up his magical sword and Ha Ba his magical bow as they made their way out the door to find their sisters. They climbed mountains and ridges, waded across rivers, before finally arriving at Li Jiang Bai Sha (丽江白沙 lì jiāng bái shā) ahead of the girls. They stood on either side of the road blocking the only path from there to the East China Sea. And there they waited, but their sisters didn't show. Before long, Yu Long felt sleepy, fighting to keep his eyes open. "I need to sleep," he said to Ha Ba, "you take first watch, then you can sleep when I'm done. But be warned, in accordance with our family's laws, should you let them slip by I will show you no mercy. Don't be careless!" Ha Ba nodded, and Yu Long went to sleep.

Shortly after the three sisters came along the path and noticed their brothers up ahead. Knowing they were no match for their brothers, the eldest sister suggested they go south instead, that there was no way they could get through the brothers without being overpowered. The second sister agreed and the two made their way south. But Nü Ji had a plan of her own.

She made her way toward her brothers, treading lightly, and began singing a beautiful song. Her soothing voice, like dewdrops and the melodious sound of a qin7, swept over Ha Ba like a hypnotic breeze, making its way through his ears and straight to his heart. She sung eighteen hypnotic songs in succession, each one sweeping through Ha Ba until he gradually fell asleep. Nü Ji took the opportunity and slipped past between the soles of their abutting feet. She let out a sigh of relief and laughed as soon as she passed them but quickly picked up her pace after the thought of them catching up with her. She ran east and didn't look back.

Ending 1:
Once Nü Ji had passed, Yu Long and Ha Ba transformed into two towering snow-capped mountains, creating a massive canyon between them. The canyon would later be called the Hu Tiao Gorge (虎跳峡 hǔ tiào xiá). The road the three sisters took since they left their home transformed into the River Nü Ji, which wrapped its way through the newly formed mountains. A demon's body8 transformed into a strange stone called the Hu Tao Stone (虎跳石 hǔ tiào shí), Ha Ba's bow fell and formed twenty-four bends on the west bank of the River Nü Ji, and his quiver fell, scattering arrows everywhere that all transformed to create a forest of pine and cedar trees. Yu Long's back turned into a steep cliff the likes of which not even a monkey could scale, stood on the east side of the River Nü Ji like a giant sword in the ground. His sword became the thirteen peaks of the Yu Long Snow-Capped Mountains (玉龙雪山 yù lóng xuě shān), and two rivers formed at the foot of the mountains, one running black the other running white. The rivers are said to flow for eternity.

8 A demon had been following Nü Ji on her path, picking up all the precious gems that were falling from her dress along the way.

The eighteen songs Nü Ji sung transformed into eighteen marshlands within the Hu Tiao Gorge. The section of the River Nü Ji from the tip of Hu Tiao Gorge - the place where Nü Ji treaded lightly - to the lower head of the sedan chair flowed slowly, like a bright mirror embedded in the bottom of the valley reflecting back up at the heavens. Past this point the river rages white creating a noise that can reach the sky. It is said that the raging waters and the sound of the waves crashing represent Nü Ji dancing with joy and laughing blissfully as she passed her brothers and made her way to a better life. She overcame her hardships and finally arrived at the place where the golden sun rises. There she met her prince, and found her happy ending.

Ending 2:
Yu Long woke to find Ha Ba sleeping and the tracks of his three sisters on the ground. They were long gone and would now be impossible to catch. Furious with Ha Ba, and sad that they would never be allowed to return home, Yu Long felt he had no choice but to cut his brother's head off. He had neglected his duties, broken the laws of their family and let their sisters go. He had no choice. He picked up his sword intending to chop off Ha Ba's head as he slept when suddenly a demon appeared in the north. The demon had heard that Nü Ji was making her way to the east and knew of the dress that was bestowed upon her by the Moon Princess. The demon had intended to cut her off and steal the precious dress from her, but he was too late, Nü Ji was gone. Instead, all he could do was follow in her trail and pick up any precious stones that had fallen from her dress.

The already enraged Yu Long could no longer hold it in, he let out a shout that startled the demon and woke Ha Ba up. Ha Ba quickly realised what had happened, that he had failed his task, and knelt down to accept his punishment. Yu Long looked at him and said "according to our laws you should lose your head for what you have done, but this demon is stealing the gems that have fallen from Nü Ji's dress, if you kill him I will consider your debt paid in full."

Ha Ba picked up his bow and with one shot sent twelve arrows flying through the air. Each arrow met their target, but none were fatal. The demon drew a magical knife and rushed toward Ha Ba. They fought an intense battle but the demon didn't allow Ha Ba to gain any distance to use his powers effectively, he couldn't let another arrow loose and finally fell. The demon cut his head clean off.

Yu Long drew his sword and charged the demon. They fought for three days and three nights until Yu Long finally thrust his sword into the demon and killed it. He chopped it into ninety pieces and raised his sword in victory. But as he turned around he saw the headlessbody of Ha Ba lifeless on the floor and wept for his fallen brother.