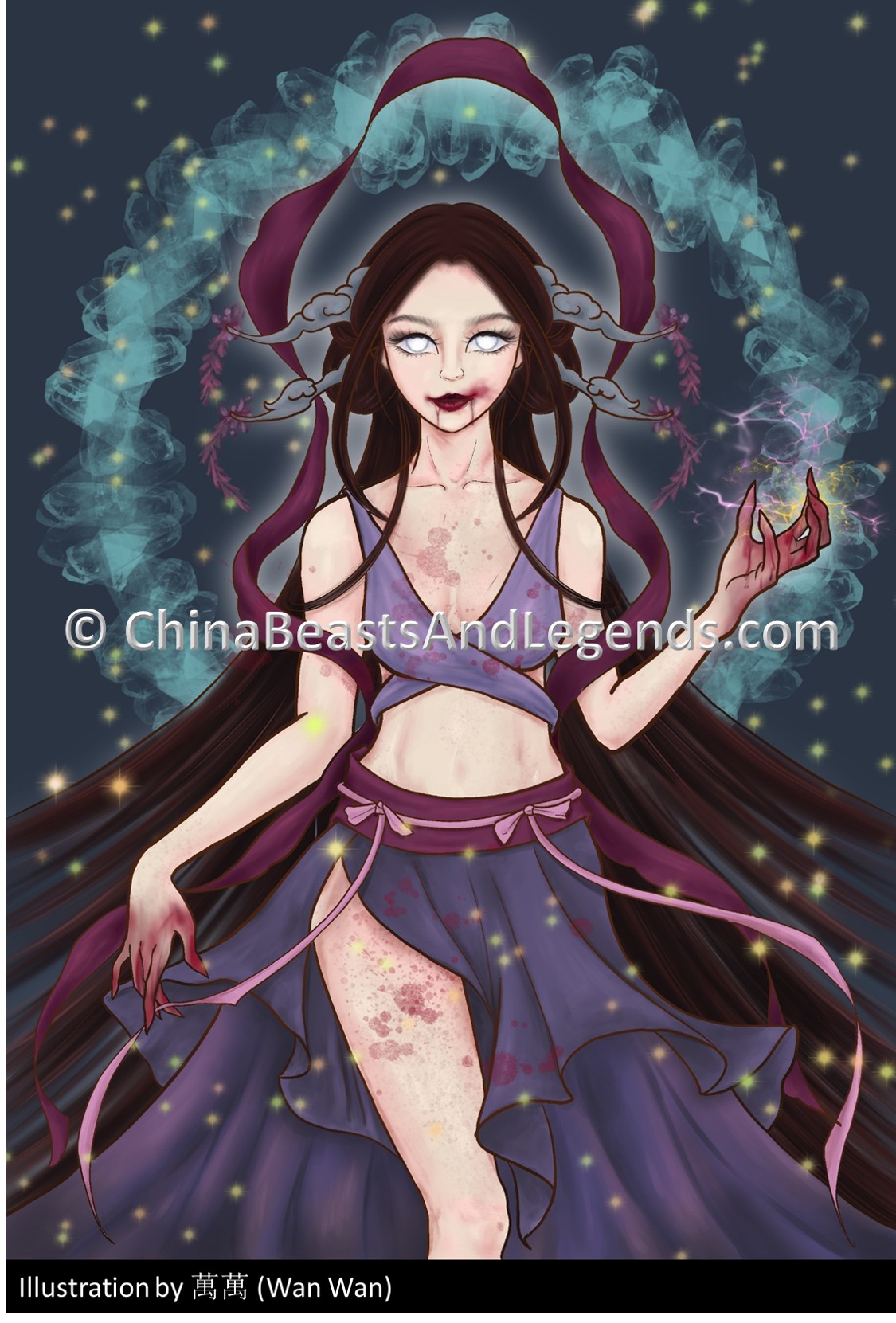 Ou Si Zhi Ye was first mentioned in the Classic of Mountains and Seas (山海经 shān hǎi jīng) in the chapter named "Regions Beyond the Seas: North" (海外北经 hǎi wài běi jīng), however, the passage is extremely short and creates more questions than it provides answers:

Which can be roughly translated to:

"Ou Si Zhi Ye [located in the] east of Da Zhong (a country), a girl on her knees, leaning on a mulberry tree, [eating the leaves and] spitting out silk."

From this description, it is clear how she got her name:

So when a character was introduced in the book called "In Search of the Supernatural" (搜神记 sōu shén jì) called Silkworm Girl (蚕女 cán nǚ), people naturally made a connection between the two. Ou Si Zhi Ye is believed to be the Silkworm Girl mentioned in the short story called "The Ancient Story of the Silkworm and the Horse" (太古蚕马记 tài gǔ cán mǎ jì).

The Ancient Story of the Silkworm and the Horse

During the tribal period, a father, mother and daughter lived together in the Guanghan area of ​​Sichuan Province. One day, the father was suddenly taken away by robbers and his whereabouts were unknown. The mother and daughter were very worried, especially the daughter, she loved her father very much. For many days she was inconsolable and wouldn't eat a thing. Seeing this, her mother became even more anxious, and publicly announced that if anyone could rescue her husband and bring him home safely, she would marry her daughter to him. Upon hearing the promise from his master, to everyone's amazement, a horse from the family stable ripped of his reins and ran off.

A few days later, the father returned to his family on the horse's back. From that day forth, the horse stopped eating grass, and every time the daughter passed by it kicked and neighed. The father thought this was very curious and couldn't understand why the horse was acting so strange. The mother on the other hand, remembered the promise she had made and explained the situation to her husband.

The father said to the horse, "Although you saved me, I can't marry my daughter to a horse!" He then bought a lot of the horse's favourite food to thank him for his bravery, but the horse still refused to eat and carried on kicking and neighing. In the end, the father felt he had no choice but to kill the horse. He slaughtered it and hung its hide outside to dry.

One day, when the daughter was passing by, the horse hide suddenly came to life, wrapped itself around her and flew away. After a while, people discovered that there was a horse skin hanging on a nearby mulberry tree, where only a silkworm spinning silk could be found.

A few days later, their daughter appeared before them on the horse's back and said to them sadly "I have become a deity," then flew away.

From that day forth the girl was worshipped as the Silkworm Goddess (蚕神 cán shén). In some places, however, she is referred to as the Horse-Head Empress (马头娘娘 mǎ tóu niáng niáng) given that she is portrayed as a girl wrapped in horse hide.

In this version of Ou Si Zhi Ye's story she is considered the seventh most powerful of the Ten Female Demons of the Wildreness (大荒十大妖女 dà huāng shí dà yāo nǚ). She was abandoned as an infant in the wilderness where she was found by the king of Ju Ying (拘缨国 jū yīng guó) - an ancient mythological country in the north of China. He found her amongst the leaves of a mulberry tree and adopted her as his own daughter. He named her Ou Si Zhi Ye.

With each passing year Ou Si Zhi Ye grew crueller, like a poisonous snake or scorpion. By the time she was 13 she had killed countless people and had learnt the arts of poison and witchcraft. She was said to be on par with the infamous Nine-Tailed Fox (九尾狐 jiǔ wěi hú).

One day, after failing to seduce the same man as the most powerful of all the female demons, Yu Shi Qie (雨师妾 yǔ shī qiè), she was forced to become the lowest of all concubines (also known as a "slave concubine" (奴妾 nú qiè)) to a two-headed Daoist master (双头老祖 shuāng tóu lǎo zǔ) as punishment.