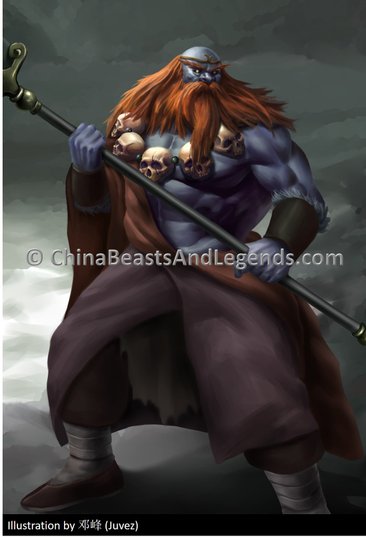 Sha Wu Jing - commonly referred to as "Sandy" in English - is a character from the Journey to the West (西游记 xī yóu jì) who was originally a God, but was cast out of Heaven for breaking a glass Zhan (盏 zhǎn)1 in a fit of rage.

1 A kind of small decorative cup, often floral in design.

2 There is much debate over the meaning behind, and the rank of, the bizzare title "Roll-up Curtain General." Basically there are two schools of thought, the first being that this is a lowly title, held by a servant of the Jade Emperor who literally opens curtains, and other such fabrics/obstacles, as the Jade Emperor enters a room or wants to look out of a window, for example. The second is that this title belongs to a close and trusted advisor of the Jade Emperor, much like a secretary to the CEO, and is a noble title.

On a personal note, given that Sha Wu Jing was exiled to Earth for merely breaking a glass Zhan, I lean toward the former.

Before being exiled to Earth, the Jade Emperor had him struck 800 times with a rod and reincarnated him as a man-eating sand demon.

In addition, as if all of that wasn't enough, every seventh day he suffered another punishment called "Ten Thousand Arrows Through the Heart" (万箭穿心 wàn jiàn chuān xīn) which was exactly what it sounds like - a bunch of arrows (ranging from 7 to 10,000 depending on which source you read) came down from Heaven and pierced through his heart causing a tremendous amount of pain. As a result of this punishment, he spent most of his time living under water in the Quicksand River (流沙河 liú shā-hé) in order to avoid the arrows, on a diet mainly consisting of human passers-by.

Sha Wu Jing is desribed as having dark blue skin, a large flame-red beard, and two large eyes that shine like lights. He stands about four meters tall, has a thundering voice much like that of an old dragon, has nine skulls3 hanging around his neck, and wields the Magic Demon-Destroyer Staff (降妖宝杖 jiàng yāo bǎo zhàng).

3 A group of nine monks embarked on a pilgrimage west to obtain the scriptures that took them past Quicksand River. Sha Wu Jing killed them all and ate their flesh, all the way down to the bones. However, unlike his other victims' bones, the monks' skulls floated to the top of the water and wouldn't sink. This amused Sha Wu Jing. So he decided to make a necklace out of their skulls and could often be seen playing with them when he was bored.

As the story goes, one day, Guan Yin (观音 guān yīn) came to Earth searching for bodyguards for Tang Seng (唐僧 táng sēng) to protect him on his pilgrimage to the west. Sha Wu Jing (who wasn't named up until this point) was recruited and requested to wait until Tang Seng, Zhu Ba Jie and the Monkey King (孙悟空 sūn wù kōng) arrived.

Soon Sha Wu Jing became Tang Seng's third and final disciple, and sworn brothers with Zhu Ba Jie and the Monkey King. Leaving his monstrous tendencies behind, he became an indispensable member of the team. Though he wasn't as strong as the other two, he wasn't as rebellious as the Monkey King, nor was he as lazy and lustful as Zhu Ba Jie. He protected Tang Seng with integrity, worked hard, held no grudges, and committed countless selfless acts in the name of their quest. His loyalty never wavered.

In the end, as payment for his service, Buddha granted him entrance to Heaven and transformed him into an arhat (罗汉 luó hàn)4 called the Golden-bodied Arhat (金身罗汉 jīn shēn luó hàn).

4In Buddhism, an arhat is one who has gained insight into the true nature of existence and has achieved nirvana.