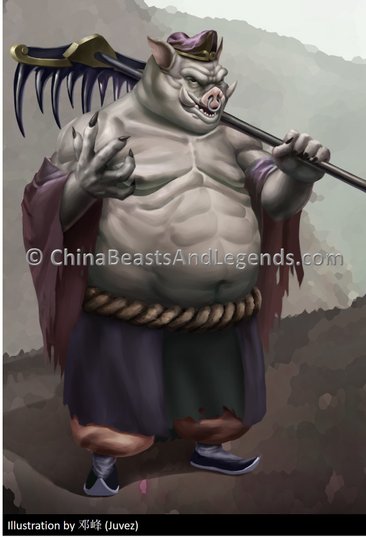 Zhu Ba Jie - commonly referred to as "Pigsy" in English - is a character from the Journey to the West (西游记 xī yóu jì) who was originally a God, but was cast out of Heaven for being overly perverse.

Like Sha Wu Jing (沙悟净 shā wù jìng), Zhu Ba Jie was originally a general in Heaven. He once earned the title Tian Peng Marshal (天蓬元帅 tiān péng yuán shuài), as appointed by the Jade Emperor (玉帝 yù dì), commanded over 100,000 soldiers, and was charged with governing the River Tian (天河 tiān hé). Things were good, but his basic instincts always got the better of him, and one day, he crossed the line.

As the story goes, the Queen Mother of the West (西王母 xī wáng mǔ) held a banquet in her heavenly Flat Peach Garden (蟠桃园 pán táo yuán), and all celestial beings were invited, including Chang' E (嫦娥 cháng' é), the Moon Goddess.

Tian Peng Marshal, who was already well-known for placing his hands where they were not welcome, took one look at Chang' E and was completely mesmorised by her beauty. After a few too many drinks, he tricked her into entering a private room and tried to force himself upon her. Luckily nothing happened. Chang' E was able to escape and Tian Peng Marshal was brought before the Jade Emperor to be judged. For his actions he was was stripped of his title and cast from Heaven, his spirit entered the Human Realm and entered the feutus of a pregnant pig.

Some versions of the story say that this was done on purpose, as a fitting punishment for his crimes, others that it was an accident.

Best known for: Being perverted and greedy

After a while, a piglet was born, with the memory of his once glorious life in Heaven. He cultivated himself and finally changed into the Pigsy we all know from the Journey to the West. His skin was dark grey, he had the face of a wild boar with two large tusks coming out of his mouth, and the body of a human. A true phyiscal representation of his former self.

Ugly beyond description he was a social outcast. He lived alone in Yun Zhan Cave (云栈洞 yún zhàn dòng) on Fu Ling Mountain (福陵山 fú líng shān) before one day when he received news that Tang Seng (唐僧 táng sēng) was planning a journey to the west in search of Buddhist scripture. Pigsy found Tang Seng and requested to join them on their journey and Tang Seng agreed. Pigsy became his second disciple - the first being the Monkey King (孙悟空 sūn wù kōng) - and Tang Seng named him "Zhu Ba Jie" - literally 猪 Pig 八 Eight 戒 Quit (as in "to quit smoking") - as the monk immediately realised the pig had to begin observing the "Eight precepts" (五荤三厌 wǔ hūn sān yàn)1.

1 The first five of the eight precepts are to refrain from killing living beings, stealing, false or damaging speech, consumption of intoxicating drink and drugs, and of all sexual activity. The final three precepts are to abstain from eating at the wrong time, certain types of entertainment (such as dancing, singing, music, watching shows), as well as to abstain from wearing luxurious garlands, perfumes, cosmetics, and personal adornments, and finally, to abstain from luxurious seats and beds.

Though there were many hiccups along the way, Pigsy proved to be a loyal disciple and worked well with his newly sworn brother, the Monkey King, to protect Tang Seng on his perilous journey to the west. He wielded the Nine-Toothed Rake (九齿钉耙 jiǔ chǐ dīng pá) which was bestowed upon him by the Jade Emperor, mastered the Cloud Somersault (筋斗云 Jīn dǒu yún)2, as well as the Way of the 36 Changes (三十六般变化 sān shí liù bān biàn huà)3.

2  the ability to jump on to a cloud and use it to travel great distances in a short period of time.

3 the ability to morph into 36 different natural objects or beings.

In the end, most of Pigsy's fellow pilgrims achieved enlightenment and become arhats (罗汉 luó hàn)4, but he did not. Despite vast improvements, the Jade Emperor observed that, in many ways, he was still a slave to his base desires. Though once again granted entrance to Heaven, he was only given a lowly title - "Cleanser of the Altars" (净坛使者 jìng tán shǐ zhě) - and all the leftovers he could eat for playing his role in the success of the pilgrimage.

4In Buddhism, an arhat is one who has gained insight into the true nature of existence and has achieved nirvana.