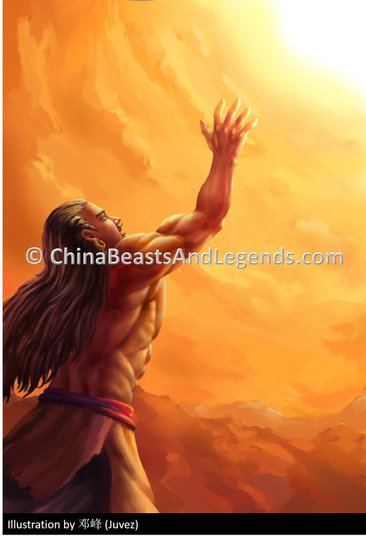 Kua Fu is a famous giant from Chinese mythology that chased the Sun only to die of dehydration before reaching his goal. His story is often told and teaches us to stay humble and not to overestimate our capabilities (夸父追日 kuā fù zhuī rì).

During the reign of the Yellow Emperor (黄帝 huáng dì) there was a mountain in the Great Northern Wilderness (北方大荒 běi fāng dà huāng) that rose high from the ground and above the skyline. It was called "Cheng Du Holding up the Heavens" (成都载天 chéng dū zài tiān), was shrouded in clouds and mist, and was covered in pine and cypress trees, creating a majestic scene high in the sky.

Atop the mountain their lived a clan called the Kua Fu Clan (夸父族 kuā fù zú), all members of which were direct descendants of the great goddess Hou Tu (后土 hòu tǔ). Each member was tall and strong, and had an innate sense of justice. They could often be found fighting against injustice in the world.

At that time, in the south, war was brewing between Chi You (蚩尤 chīyóu) and the Yellow Emperor. Realising he was outmatched, Chi You sent word to the Kua Fu Clan requesting their support. And since, from their point of view, the weak was in need of help, they decided to send troops to aid him.

The addition of the giants to his troops made Chi You ever-more powerful. Realising the difference the Kua Fu Clan had made to his enemy's strength, the Yellow Emperor had no choice but to seek help from the Gods.

Best known for: Chasing the Sun

He travelled to Tai Mountain (泰山 tài shān) to speak with the gods. Finally a goddess named Xuan Nü (玄女 xuán nǚ) - often referred to in English as the "Dark Lady" - came down from the Heavens, riding on a Feng Huang (凤凰 fèng huáng), and taught the Yellow Emperor the art of war. She also bestowed upon him many treasures that would aid him in his plight. Finally, she sent for someone to bring him red copper from Kun Wu Mountain (昆吾 kūn wú shān) and instructed him to use the material to craft powerful swords capable of cutting through gold, jade and iron like mud.

The Yellow Emperor returned to his base and used what he had been given to create the strongest army on earth. And in the Battle of Zhou Lu (涿鹿大战 zhuō lù dà zhàn), he finally defeated Chi You. The remaining Kua Fu tribesmen retreated back to their home in the mountains.

Soon after the battle a severe nautral disaster befell the earth. The Sun grew in size and scorched the ground, drying up the rivers and lakes. All members of the Kua Fu Clan set out to find water to fight the drought, but they soon found that all the rivers and lakes had dried up. The leader of the Kua Fu Clan grew anxious and vowed to destroy the Sun for what it had done. Seeing that Kua Fu was really angry, the Sun panicked. It sped up and travelled west as fast as it could. The leader of Kua Fu took chase. The Sun moved faster through the sky, aiming it's heat toward Kua Fu, trying to stop him in his tracks but Kua Fu refused to stop. He chased the Sun for thousands of miles until finally the Sun was forced to set. With nowhere to go Kua Fu laughed, "where will you flee now?!"

Realising Kua Fu was right the Sun gathered the remainder of it's energy and directed it toward Kua Fu. Kua Fu felt dizzy and began to lose conciousness. His mouth dried up, his tongue burnt in his mouth and his hands went limp.

"I must not fall!" he persuaded himself. As he looked around desparately he noticed the Yellow River, a long and deep river that the Sun had not yet dried up. He knelt down and began to drink, however, after drinking the river in it's entirety, including all of it's tributaries, his thirst was not quenched. He decided he would drink all the water in the Ocean (大泽 dà zé), "surely that would satiate my thirst. Then I will continue to chase down the Sun." But as the stubborn Kua Fu leaned forward to drink from the ocean, he collapsed like a mountain with a great thud.

With this final breath Kua Fu stared at the Sun as it sunk behind horizon. He sighed regretfully and threw his club toward the Sun, closed his eyes and died.

The next morning, the Sun rose and saw that Kua Fu had collapsed to form a mountain. In admiration of Kua Fu's courage and tenacity, the Sun decided to focus it's rays on his club which soon after formed a peach tree forest where all the trees bore huge fruits in his honour.

In ancient times there was a giant named Kua Fu that lived alone on a desolate mountain in the north. He had two yellow snakes sprouting from his ears and held another two snakes in his hands.

Kua Fu loved to explore. One day, he suddenly had the idea that he wanted to see what the Sun was like up close. He sprung to his feet and began to run, like a gust of wind, running hundreds of leagues in the blink of an eye.

As he fell, Kua Fu dropped his walking stick, and where it landed a peach forest that spanned 300 leagues sprung from the ground. And his massive body became Kua Fu Mountain (夸父山 kuā fù shān). Both the forest and the mountain can be found today in Ling Bao City (灵宝市 líng bǎo shì).

In ancient times there was a majestic mountain in the north called Cheng Du Holding up the Heavens. On the mountain there lived a clan of giants called the Kua Fu Clan, the leader of which was named Kua Fu. He was colossal, powerful, strong-willed, and extraordinary. At that time, the world was a terrible place, venomous snakes and beasts ran rampant, and people's lives were miserable. To ensure the survival of his tribesmen, Kua Fu led them to fight against the beasts every single day. Upon return, he would often hang the carcasses of ferocious yellow snakes he had killed on his ears as trophies.

One year, the Sun grew too hot, scorched the earth, dried the rivers and destroyed crops. Many of his people died. Seeing all the suffering the Sun had caused Kua Fu had no choice, he set his mind on capturing the Sun and putting it in it's rightful place, making sure it served it's purpose and the people correctly from now on.

So one day, when the Sun rose, Kua Fu put on his boots - now known as the Sun-Chasing Boots (追日靴 zhuī rì xuē), and began his chase. When he felt hungry, he would eat berries and fruits from the trees; when he became thirsty, he would drink water from the rivers; and when he felt tired, he would nap until he regained his strength. At one point he took off his boots and shook the dirt that had accumulated in them out on the ground and formed a mountain.

As he ran he continued to persuade himself that if only he could reach the Sun, all things would return to normal and his people would be safe from harm.

For nine days and nine nights Kua Fu chased the Sun. And on the final day when the Sun arrived at Yu Valley, it was in reach. Despite the blistering heat Kua Fu was overjoyed and over excited at the prospect of reaching the Sun. But as he reached out to grab it he fainted from exhaustion. When he woke, the Sun was long gone.

Still determined Kua Fu rose to his feet with the intention of continuing the chase. However, he quickly realised that being so close to the Sun had rid his body of any water. So he quickly ran to the Yellow River and drank it dry but his thirst was not quenched. He ran to the River Wei (渭河 wèi hé) and drank it dry but his thirst was still not quenched. He turned north toward the ocean but before he could reach he fell slowly to his death. His body could no longer support him.