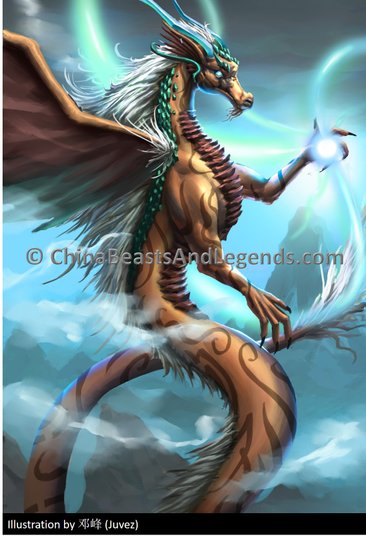 Ying Long is known by many names, including Ji (吉 jí), Geng Chen (庚辰 gēng chén), Huang Long (黄龙 huáng lóng) and Fei Long (飞龙 fēi lóng). She is the original dragon that all other dragons descend from, one of the Four Great Dragon Gods (四大神龙 sì dà shén lóng), and the only winged-dragon in Chinese mythology. She is the mother of the Feng Huang (凤凰 fèng huáng) and Qi Lin (麒麟 qí lín)1 and is a rain deity connected to multiple legends and folktales.

Ying Long embodies the Creation of the Universe, the Creation of all Things, as well as the Destruction of all Things. In one version of Chinese Creation Theory, it was Ying Long that laid the egg that birthed the Giant God, Pan Gu (盘古 pán gǔ) in the primordial beginning. It was Ying Long that created all things on earth by making rain fall from the Heavens, and it is she who has the power to make the Sun and Moon dissapear, even cause all matter in the Universe to cease to exist, should her wrath be incurred.

Though Ying Long resided in Heaven, there are multiple accounts of her coming down to earth; to provide Fu Xi (伏羲 fú xī) with the He Map (河图 hé tú) - commonly attributed to Long Ma (龙马 lóng mǎ); to take Nü Wa (女娲 nǚ wā) to see the Jade Emperor (玉帝 yù dì); to teach Yan Di (炎帝 yán dì) everything he needed to know about medicine and agriculture; when Huang Di (黄帝 huáng dì) and Chi You (蚩尤 chī yóu) met in battle, it was Ying Long that finally defeated Chi You and Kua Fu (夸父 kuā fù); and it was also Ying Long that helped the Great Yu (大禹 dà yǔ) regulate floods across China by creating the Yellow River (黄河 huáng hé) and all its tributaries with a stroke of her tail.

Best known for: A winged-dragon

It is said that when she spoke all deities in the Nine Heavens would listen, and so, she is also known as the Teacher of all Gods (众神之师 zhòng shén zhī shī).

The Classic of Mountains and Seas

“On the northeast corner of the Great Wilderness there is a mountain named Xiong Li Tu Qiu (凶犁土丘 xiōng lí tǔ qiū shān). Ying Long lives at the southernmost point of the mountain. She can no longer return to the Heavens because she killed Chi You and Kua Fu, causing droughts on earth2. Whenever the people on earth encounter drought, they dress up as dragons and pray for rain causing a great downpour.”

2 Since Ying Long is a rain deity and can control the wind and rain, her absence in Heaven caused the earth to dry up.

"In the Great Wilderness there is a mountain named Cheng Du Zai Tian Mountain (成都载天山 chéng dū zài tiān shān). And on this mountain there lives a man with two yellow snakes on his ears and two yellow snakes in his hands, his name is Kua Fu. Hou Tu (后土 hòu tǔ) gave birth to Xin (信 xìn), and Xin gave birth to Kua Fu. But Kua Fu overestimated his strength, he wanted to catch the Sun and chased [it all the way] to Yu Valley (禺谷 yú gǔ)3. Kua Fu tried to drink the Yellow River to quench his thirst, but it could not satisfy him. He was about to head north to drink water from the Ocean (大泽 dà zé) but he died of thirst before he arrived. After Ying Long killed Chi You, she killed Kua Fu4, too, before diminishing to the south, which is why it rains so much in the south."

3 Yu Valley - the place where the Sun sets

4 It is important to remember that the Classic of Mountains and Seas is comprised of a collection of material over thousands of years. It is believed that the original text was extremely difficult to understand, and the content has been simplified and revised multiple times over the years. The current version has been pieced together from different dynasties and generations and is therefore filled with many inconsistancies and contradictions. Sadly, we may never know what was written in the original texts. It is unclear if Kua Fu died by Ying Long's hand, or from his own foolish acts.

"In the Great Wilderness there is a mountain named Bu Ju (不句 bù jù), here the sea water pours in from the north. There is a mountain called Kun Mountain (昆山 kūn shān) where the Gong Gong Platform (公共台 gòng gōng tái) is situated. Archers fear the spirit of Gong Gong and dare not draw their bows and shoot arrows toward the north. A lady can be found here, dressed in cyan clothes named Nü Ba (女魃 nǚ bá)5. Chi You made a variety of weapons to fight Huang Di, so Huang Di sent Ying Long to the wilderness of Ji Zhou (冀州 jì zhōu) to attack Chi You. Ying Long accumulated a lot of water [to fight Chi You], so Chi You called upon Feng Bo (风波 fēng bó) and Yu Shi (雨师 yǔ shī) [the Gods of Wind and Rain, respectively] to stir up a storm. Huang Di sent for the goddess named Nü Ba to aid him, the rain stopped, and so, Chi You was killed. [As a result,] Nü Ba was unable to return to Heaven. Anywhere she went, there was no rain. Shu Jun (叔均 shū jūn)6 reported the matter to Huang Di who later rellocated Nü Ba to the north of Chi Shui (赤水 chì shuǐ). Shu Jun became Tian Zu (田祖 tián zǔ). Wherever Nü Ba tried to escape to, drought would follow and the people prayed for her to leave: "Goddess, please go [back to the] north!" And they would clear the waterways and dredge the canals [in preparation for her departure].

5 Nü Ba is the Goddess of Draught, and daughter of Huang Di (the Yellow Emperor)