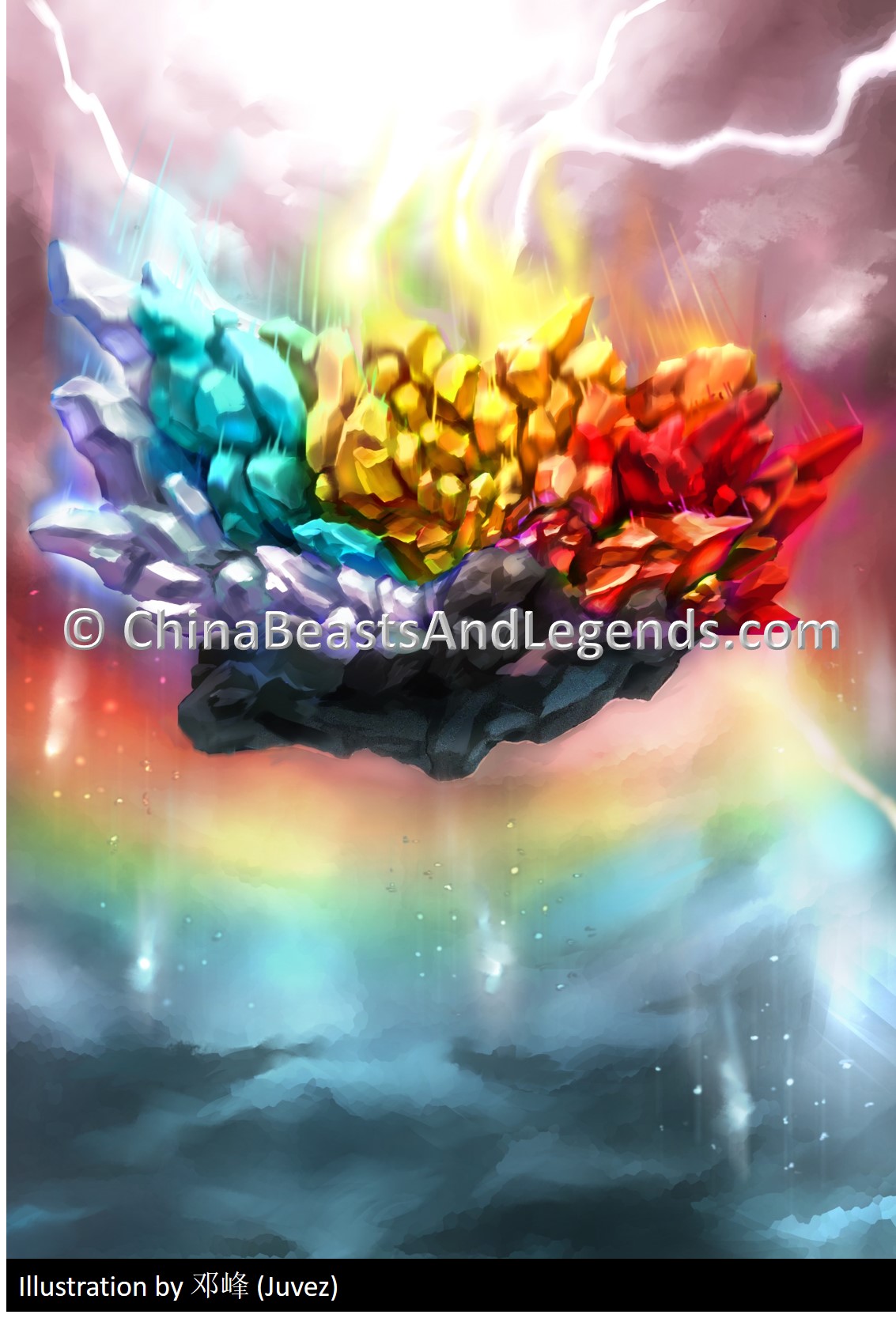 The name of these legendary stones comes from the story of Nü Wa (女娲 nǚ wā) mending the sky. Nü Wa, "the Mother," "Creator of Mankind," and wife of Fu Xi (伏羲 fú xī), was forced to take action to save her children (mankind) from the damage that had been caused by Gong Gong (共工 gòng gōng), the Water God, when he rammed into Bu Zhou Mountain (不周山 bù zhōu shān) after suffering a humiliating defeat at the hands of Zhu Rong (祝融 zhù róng), the Fire God, in an epic battle that shook the earth.

Since Bu Zhou Mountain is one of the Four Pillars that hold up the sky (四方的擎天柱 sì fāng de qíng tiān zhù), when Gong Gong rammed into and broke Bu Zhou Mountain, the sky ripped open and brought with it calamaties the likes of which the earth had never seen.

Yin and Yang (阴阳 yīn yáng) were no longer balanced, fires raged that could not be extinguished and water flowed endlessly over the earth. Beasts ravaged the innocent, and predators prayed on the old and weak.

Nü Wa couldn't bear to watch her children suffer any longer. The great giant turtle, Ao (鳌 áo), offered his legs in sacrifice to relpace the damaged pillar, and Nü Wa refined the Five-Colour Stones (五色石 wǔ sè shí)2 - now known as the Nü Wa Bu Shi, where Bu (补 bǔ) means "to repair" or "to mend" and Shi (石 shí) means "stone" -  to patch up the hole in the sky.

Best known for: Being used to mend the sky

2 Five colours, one for each of the elements, or phases (五行 wǔ xíng); metal is white, wood is green, water is black, fire is red, and earth is yellow.

Nü Wa used Ao's legs to fix the sky pillar, Bu Zhou Mountain, then proceeded to patch up the hole in the sky with the Five-Coloured Stones3. Balance was restored. She then proceeded to calm the floods, extinguish the fires, kill the beasts that were attacking her children, and eliminated all adversity bringing peace back to the earth.

3 Some versions of the story state that she created 36,501 Five-Coloured Stones, 36,500 of which were used to repair the sky, with 1 left over that transformed into a treasure of some kind. In the Journey to the West, the Monkey King (孙悟空  sūn wù kōng) was said to have been born from the left over stone that sat on a mountain for thousands of years absorbing energy from the Sun until one day a stone monkey was born...