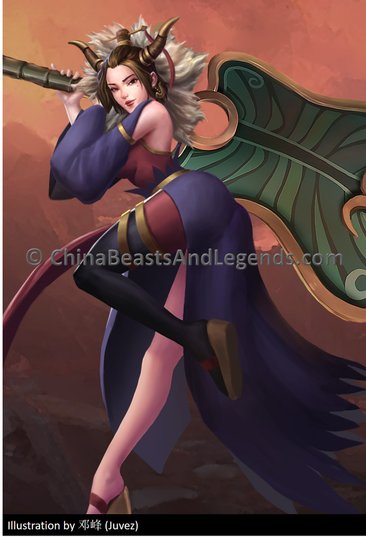 Princess Iron Fan is a popular character from the classic novel Journey to the West. She was1 the wife of the main antagonist, Bull-Demon King (牛魔王 niú mó wáng), and together they had a son called Red Boy (红孩儿 hóng hái ér).

1 They divorced after Princess Iron Fan discovered her husband had been having an affair with a fox-spirit called the Jade-Faced Fox (玉面狐狸 yù miàn hú lí).

She is a beautiful mountain goddess2 that resides in Ba Jiao Cave (芭蕉洞 bā jiāo dòng) on Cui Yun Mountain (翠云山 cuì yún shān), and wields the Ba Jiao Fan (芭蕉扇 bā jiāo shàn) - often referred to as the Banana Leaf Fan in English. The Banana Leaf Fan is a large magical fan with the ability to create whirlwinds that can put out any fire. In the novel, Princess Iron Fan uses her magical Banana Leaf Fan to put out the fires on Fire Mountain (火焰山 huǒ yàn shān) once every year. She chooses to do this annually (rather than permanantly) so that the local villagers worship her as a goddess and make offerings to her in return for their safety.

2 There is much deliberation regarding the nature of Princess Iron Fan. It is written that she has "attained the Way" (a higher level of attainment in Daoism) and that she is a Xian (仙 xiān) - often translated to "fairy" in English, although the terminology is misleading - but in the novel she clearly isn't "good," which leads a lot of critics to believe she is a Yao (妖 yāo) - often translated to as "monster" or "demon" in English, although once again, the terminology is misleading. Officially, however, she is a Xian.

The main reasoning for her being a Xian is that the Monkey King (孙悟空 sūn wù kōng) has the ability to identify Yao on sight, regardless of what form they take, but despite numerous encounters with Princess Iron Fan, he did not accuse her of being a Yao.

When the Monkey King and his companions reached Fire Mountain they used the the Banana Leaf Fan on the fire only to realise they had been given a fake. Instead of extinguishing the flames, the flames intensified, almost bringing their pilgrimage to an abrupt end. So the Monkey King used his abilities to tranform into the Bull-Demon King and tricked Princess Iron Fan into handing over the real Banana Leaf Fan.

When the real Bull-Demon King returned home and realised what had happened, he used his abilities to transform into Zhu Ba Jie (猪八戒 zhū bā jiè) and convinced the Monkey King to let him carry the Banana Leaf Fan for him. In the end, the Jade Emperor (玉帝 yù dì) intervened, helped the Monkey King defeat Princess Iron Fan and the Bull-Demon King, and forced them to hand over the real Banana Leaf Fan.